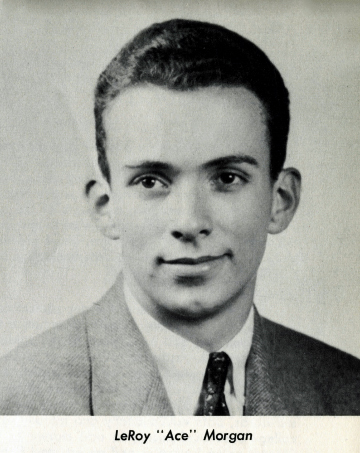 In the summer of 1942, Leroy “Ace” Morgan had just finished his first year at Iowa State University and was back home in Cleveland Heights, Ohio. In the nearby Cain Park Theatre, Ace became acquainted with Edward Wright. We can only speculate now what exactly it was about Ace Morgan that drew Professor Wright to him. By all accounts, Ace was deeply talented in the theater arts. Somehow, either Wright convinced him to transfer to Denison – or perhaps Ace Morgan was looking for a smaller school closer to home where he could be given plenty of opportunities to perform and direct. Whatever the cause, Ace Morgan enrolled as a sophomore at Denison University in the fall of 1942. 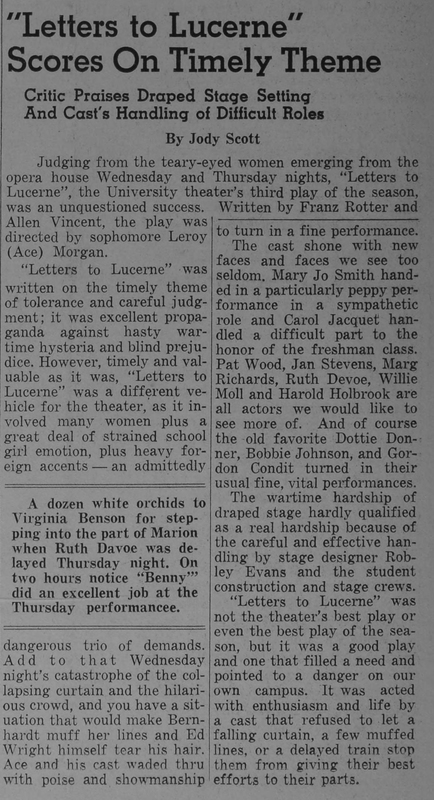 February 3, 1943: Letters to Lucerne is met with positive reviews.

Immediately, Ace Morgan showed the campus what he could do. He was put in the director’s chair for a one-act play of his choice, deciding on Box and Cox – a farce of two boarders (Mr. Box and Mr. Cox) who have been rented the same room by the landlady. Since one man works during the day and one during the night, she hopes to charge both for only one room. The men eventually figure this out and confront the landlady, before they find they have even more in common with each other.

After the success of Box and Cox, Ace Morgan was asked to direct a full-length play. Due to the raging war overseas, there was a severe lack of men on campus. Using the deep roster of women actors to his advantage, Ace Morgan choses to direct Letters to Lucerne. This production was so well done that it was decided to make it a part of the regular varsity season of performances. Professor Wright was already predicting great things for Ace’s future.

I would prophesy that ten years from now Ace Morgan will be one of the country’s most prominent and successful directors either in New York or Hollywood, and that the 13 members of this cast will be boasting that they were so fortunate as to have worked under the direction ‘way back when.’

But it wasn’t only directing – Ace Morgan could just as easily act upon the stage with the likes of Hal Holbrook in performances such as Ah, Wilderness! In his first year on campus, Ace Morgan was selected as a member of the Blue Keys – a men’s junior honorary. He also wrote the humorous “Stuff and Things” column with Jim Geladas in The Denisonian. 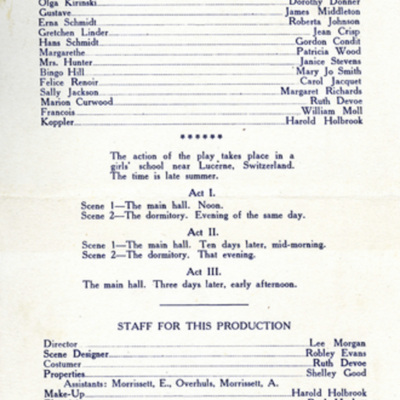 Program from Letters to Lucerne. 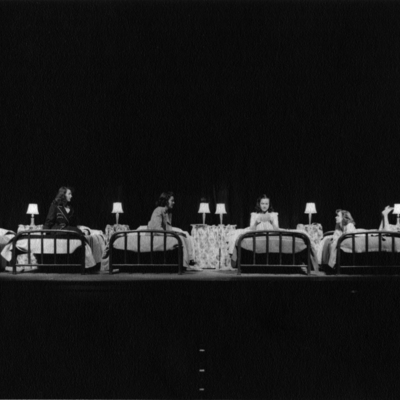 From Letters to Lucerne 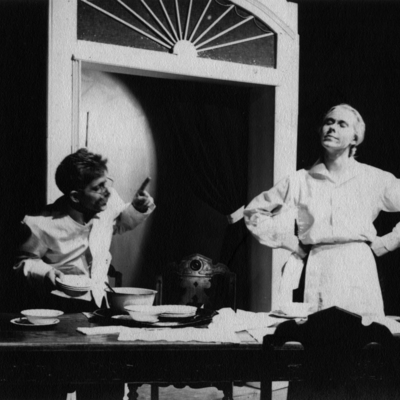 From Letters to Lucerne. Hal Holbrook is on the left. 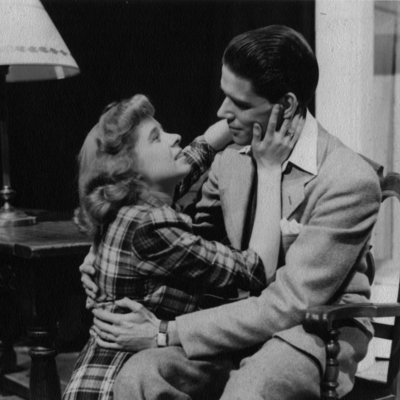 From Letters to Lucerne. Gordon Condit is on the right. 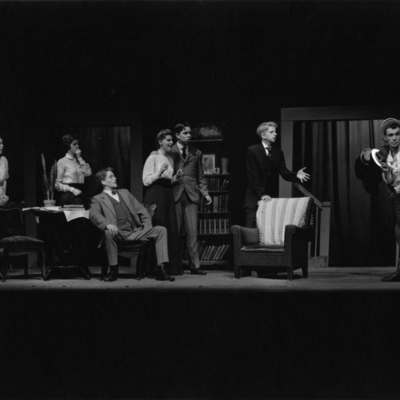 From Ah, Wilderness! Ace Morgan is on the far right. Hal Holbrook is seated. 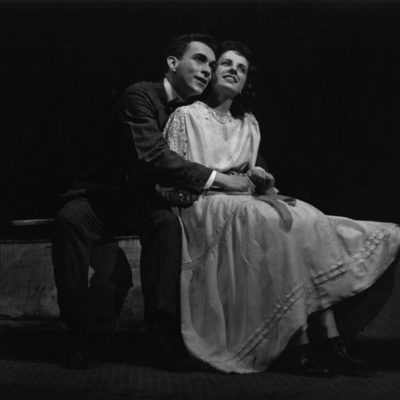 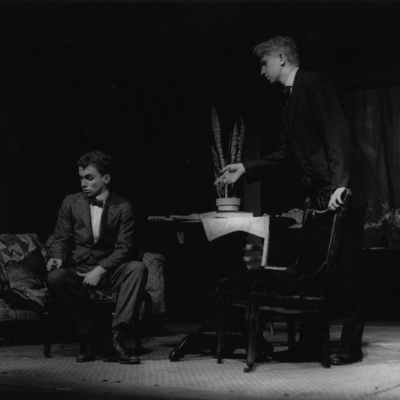 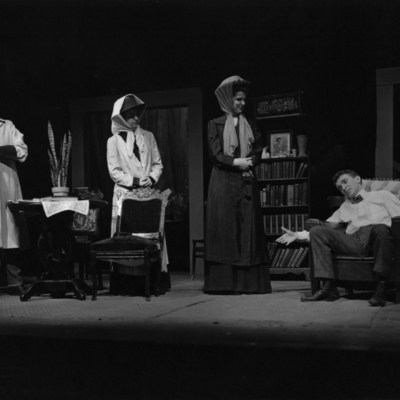 While helping as an assistant director on Gordon Condit’s original play The World Within, Ace Morgan was called up to join the Army in May of 1943. On February 7, 1945, Ace Morgan was killed in action.

"No, many of you did not know Ace Morgan. I wish you had." 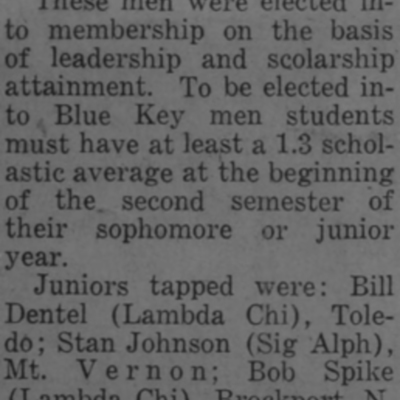 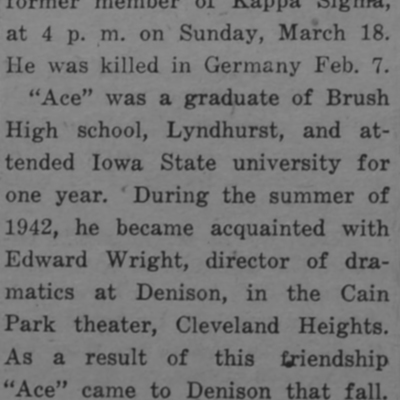 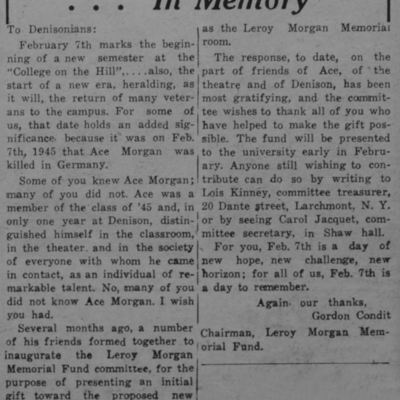 January 25, 1946: Gordon Condit writes about his friend and the memorial fund which has been started in his memory. 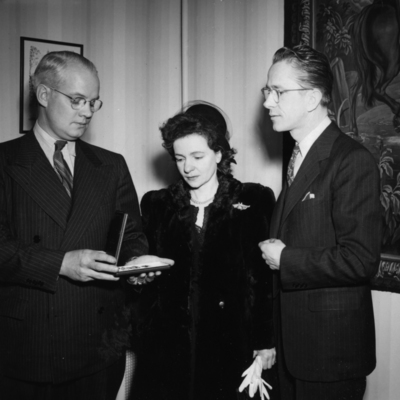