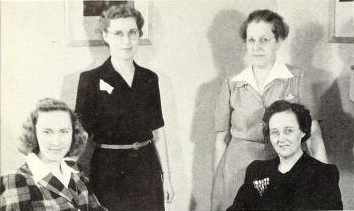 Marian Mahard (standing left) in the 1944 Adytum. Mrs. Mahard would return to work at Denison again near the end of Richard Mahard's time in the Army.

Marian Neir Mahard married Richard Mahard on June 12, 1938. They met at Roosevelt High School in Ypsilanti, Michigan. The Mahards moved to Granville, Ohio, in 1941 when Richard Mahard began teaching in the Geology & Geography Department at Denison University. Mrs. Mahard worked as a secretary for Dean Richards during part of World War II while her husband was in the Army. Marian and Richard wrote letters and postcards to each other almost every day. It is quite clear that the couple cared greatly for one another, with Marian occasionally making long trips in order to spend just a few hours with Richard.