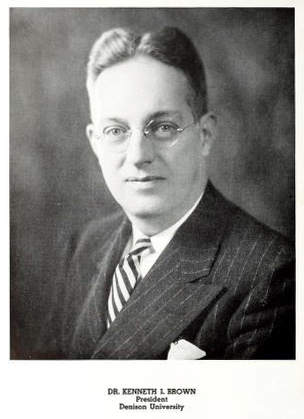 President Brown in the 1946 Adytum.

Kenneth Brown became President of Denison University in 1940. Just over a year later, on that fateful day, December 7, 1941, Richard Mahard was in the home of President Brown. Mahard had been selected as a member of Christian Emphasis Week’s planning committee. A radio was playing softly next to Brown, when suddenly he turned and increased the volume. The voice from the radio interrupted their meeting and announced the Japanese attack on Pearl Harbor. President Brown turned off the radio and the meeting was resumed, but the war was on.