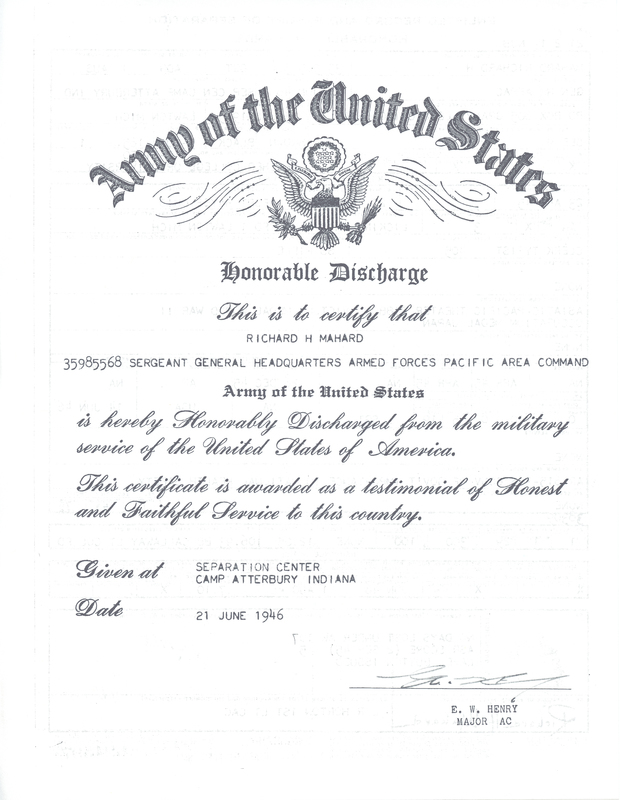 The document certifying that Mahard was honorably discharged from the Army.

On May 14, 1946, Mahard received news that his discharge had been approved. After months of corresponding with Dean Richards, President Brown, Professor Wright, professors at other institutions, and anyone else who Mahard thought could help, Mahard could see the classroom lights at the end of the tunnel. Mahard was surprised when he was not as excited as he thought he would be upon hearing the news. Instead, his focus immediately shifted to figuring out what paperwork needed filled out and how much longer it would be until he could see Marian again.

It did not take Mahard long to fill out the appropriate forms, inform Marian that he would be home sooner than he could have ever dreamed, and prepare for the journey home. It pained him to do so, but Mahard burned almost all of Marian's remaining letters to him in an incinerator. His Army lifestyle left very little space to store mementos from home. The words Marian wrote to Mahard may only be presumed based upon the responses Mahard penned in his own letters home and the very small handful of surviving letters.

The longest and perhaps most difficult part of Mahard's return to the United States was at the Replacement Depot near Yokohama, Japan. For two weeks Mahard waited for a ship to bring him home. Mahard needed two more shots before he could come home, and this somewhat delayed his departure. After the doctors were certain his smallpox shot had been successful, it was entirely a waiting game.

On June 2, 1946, Mahard's ride home arrived - Goucher Victory. On the voyage home, Mahard signed up for a job onboard with the special services in order to avoid any more time working in the kitchen. The job turned out to be more than just typing forms and reports. Mahard, along with ten or so other men, worked on the Goucher Growl, the newspaper aboard the ship. The work kept Mahard busy and he had very little time left to write home. But, it would not be long. On June 12, 1946, Mahard passed through Glacier National Park where he had worked as a park ranger in 1939 and lived with Marian for a summer. In less than a week, he was with her again on the streets of Indianapolis after being processed through Camp Atterbury as he had been roughly 14 months before. Mahard would return to teaching at Denison in the fall of 1946 and would continue until his retirement in 1980.