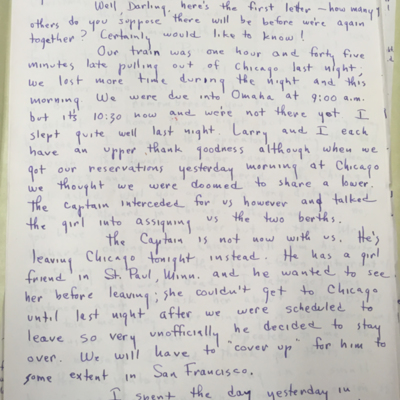 December 7, 1945: Mahard on the train somewhere in Iowa on his way from Virginia to Hamilton Army Airfield in California. 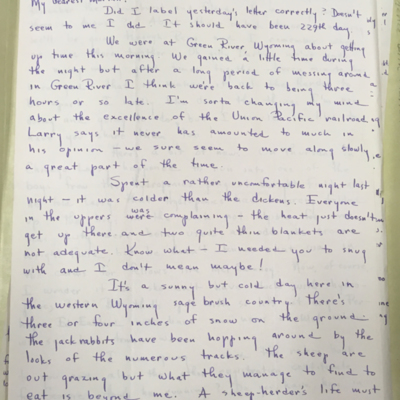 December 8, 1945: Still en route to California, Mahard hears second-hand from Larry that the hydroponics project they had been a part of was shut down. 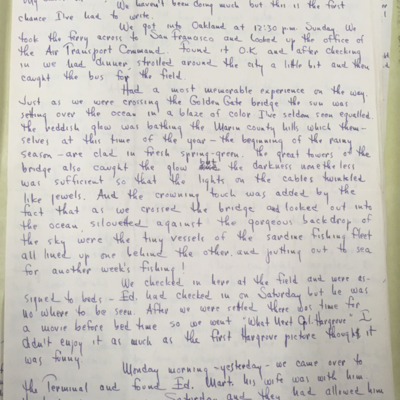 December 11, 1945: Mahard finally has a chance to write from Hamilton Army Airfield. 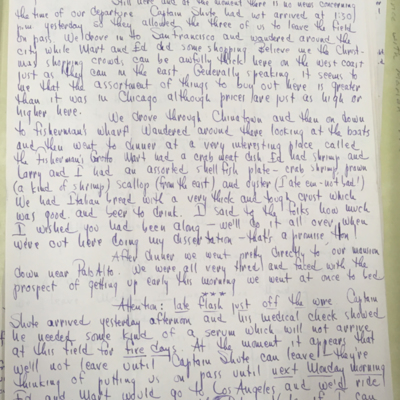 December 12, 1945: One of the two captains in the group needs shots before the group can board a plan to Japan. The real waiting game begins. 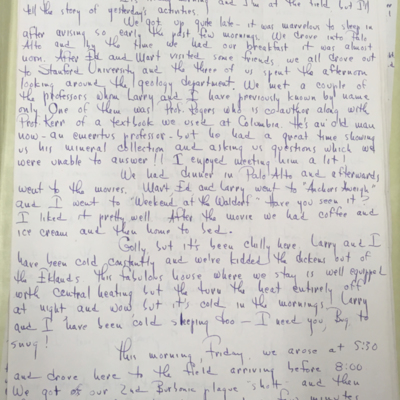 December 13, 1945: Larry, Ed with his wife, and Mahard hit the town. Highlights include a trip to Stanford University and a trip to the movie theatre. 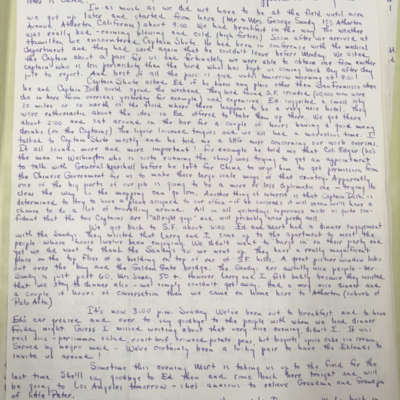 December 15, 1945: Larry, Ed, and Mahard go out drinking with the captains. They seem like swell guys. 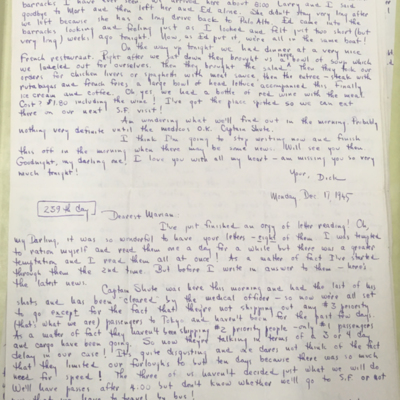 December 16-17, 1945: Mahard receives his first letters from Marian while in California, and the captain has received all his proper shots now. 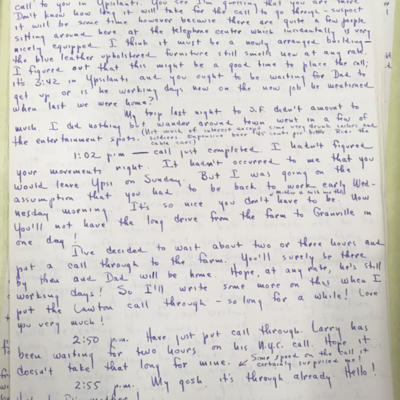 December 23, 1945: Mahard calls long distance to talk with his parents and Marian, who is visiting them in Michigan for the holidays. 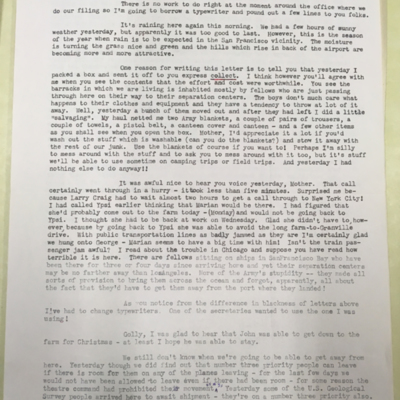 December 24, 1945: Mahard writing home to his parents just a couple days before he would fly out, bound for Japan. 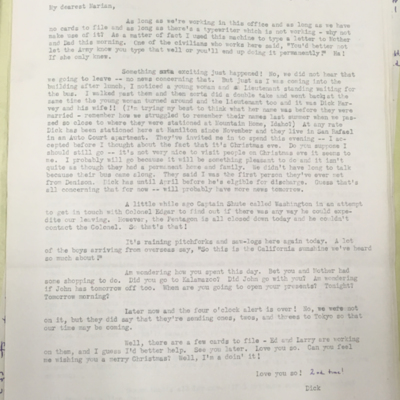 December 24, 1945: Mahard bumps into Dick and Donna Harvey. Dick was a student at Denison and is now in the service and currently stationed at Hamilton. The Harveys invited Mahard over for the evening. 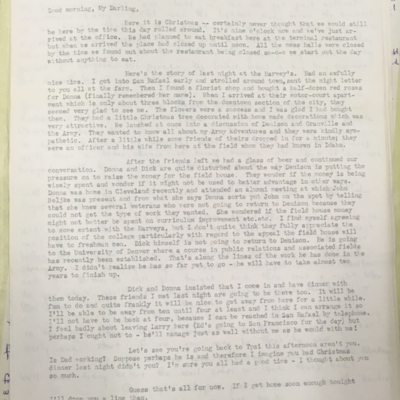 December 25, 1945: Mahard enjoyed his time with Dick and Donna and was invited to come visit again tonight. 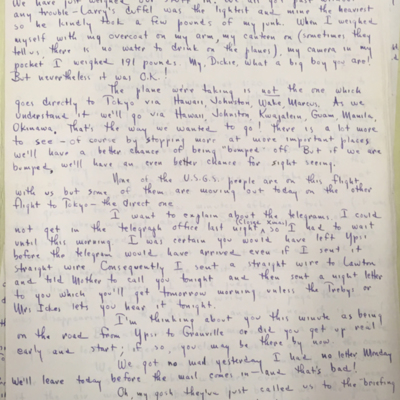 December 26, 1945: All systems GO. Mahard and the gang finally have the green light to hop on a plane bound for Japan.

Mahard's second trip to the west coast of the United States while in the Army brought him to Hamilton Army Airfield near San Francisco, California. Mahard made the cross country trip by train with Larry, Ed, and the two army captains that were put in charge of the three men. Mahard got along pretty well with the captains who did a good job of sticking up for the trio. The captains even helped Mahard and Larry get better bunks on the train. Mahard was able to pay one of the captains back by helping cover up the fact that the captain stayed an extra night in Chicago to spend some time with his girlfriend before catching up later.

After arriving at Hamilton Army Airfield, Mahard and Larry were processed and they settled in. Ed had arrived a couple days ahead with his wife, staying in a friend's nearby home. Larry and Mahard joined the couple and the men began their long wait in California. Captain Shute, the one who had stayed behind in Chicago for an extra day, needed some kind of "serum" before he would be cleared to leave for Japan. The entire group had to wait for the medicine to be delivered. The delay allowed plenty of time for Larry, Ed, and Mahard to visit the city. For example, they kept busy window shopping and going out for dinner. On a particularly memorable trip, they visited the Geology Department at Stanford University. While the three men were all offically working as typists, they were, in fact, all geologists. So they all thoroughly enjoyed their time in more familar surroundings and the conversations they had with the Stanford professors.

In keeping with the rest of Mahard's time in the Army, even after Captain Shute received his special shots, the group hit an immediate roadblock. Mahard and his cohorts were classified as a #3 priority group and only #1 priority groups and cargo were being sent to Tokyo at this time. All in all, Mahard spent just over two weeks at Hamilton Army Airfield, making him question on more than one occasion why they were in such a hurry to get out to California. This meant that Mahard spent his Christmas in the Army while waiting for a plane. However, it was not as lonely as it could have been. Mahard happened to bump into Richard "Dick" and Donna Harvey. The Harveys had been enrolled at Denison before Dick Harvey joined the service. Mahard spent a couple nights with the Harveys at their home in the city and was glad to spend time with a couple friendly faces swapping stories.

Mahard and the rest of the gang finally got their chance to fly. Their final destination - the country that had launched a surprise attack on Pearl Harbor and brought the United States into World War II. The news of which interrupted the meeting Mahard attended in President Brown's home just over 4 years previously. At exactly 2:00 pm on December 26, 1945, the plane took off for Japan.