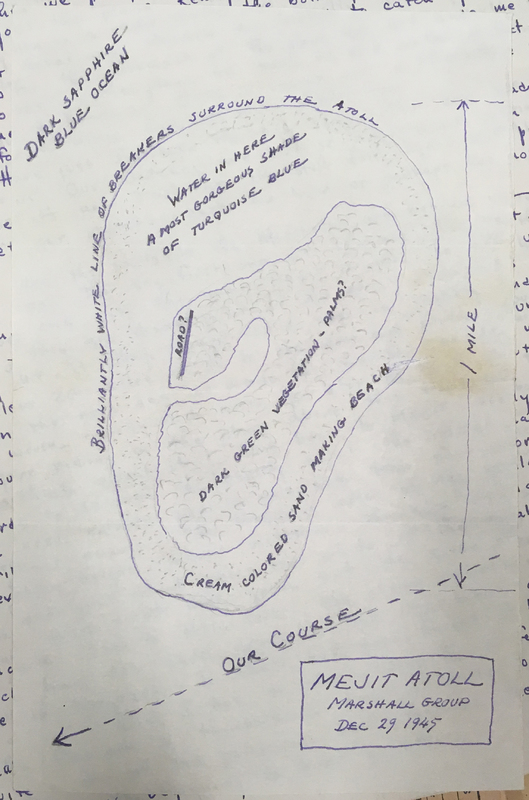 December 29, 1945: A sketch of Mejit Atoll that Mahard made from the air while passing through the Marshall Islands.

Leaving California behind, Larry, Ed, the two captains, and Mahard set off in a Douglas C-54 Skymaster. Their first stop would be Hickam Field, about 5 miles from Honolulu, Hawaii. Ed and Mahard played cribbage on the plane to fill the time when Mahard wasn't writing letters home or peering out the window at the endless ocean and sky. Mahard was pleased with the comfort of the C-54 and was glad to experience almost no bumps throughout the whole flight to Hawaii. Upon their arrival at Hickam Field, the men slept in the barracks and woke up to find they had some time to kill before their next leg of the journey. After being held at the field for most of the day, Larry, Ed, and Mahard were finally allowed to go off and see the sights in the evening. Mahard and Larry hitched a ride with a couple troops in a jeep who gave them an impromptu tour of Honolulu and Waikiki Beach. Hawaii was also the first time Mahard had a chance to witness the "scars of war" for himself. The barracks the men slept in had one or two holes from small bombs and many machine gun holes in the concrete reinforcement from the attack on Pearl Harbor.

A little after midnight, the group filed onto their plane. It was another C-54, but it was not quite as plush and accommodating as their first plane. It still did the job and they arrived at the Kwajalein Atoll in the Marshall Islands about 11 hours later for refueling. They were gone again in less than 2 hours, now headed for Guam. The weather on this section of the trip was far from ideal, and the C-54 "buck[ed] and jump[ed] around like a bronco" through the air. Mahard, in a true geologist spirit, even managed to sketch Mejit Atoll, another island in the Marshall Islands. He told Marian the sketch did little to capture its natural beauty.

Mahard and the gang arrived in Guam about 8 hours after leaving the Marshall Islands. They slept in a hut for the night as the rain fell heavily on the jungle around them. Mahard was able to get away from the airfield for awhile and made it to Agana ("Hagåtña"in the local Chamorro language), the capital city, to look around. Guam was hit much more heavily than Hawaii over the course of the war. Mahard remarked how no building had escaped being hit or completely leveled. The natives of the island were doing what they could to rebuild and, on the whole, seemed to be recovering about as well as could be expected. Mahard also marvelled at the great amount of military equipment and supplies that lay in great piles all over the island. Of course Mahard could not leave the island without another flub by the Army. This time it had not been made clear that the 5 men (Larry, Ed, the two captains, and Mahard) were to be kept together on their trip to Japan. At around midnight, Ed and the two captains boarded a plan headed to Tokyo while Larry and Mahard were left behind. Mahard spent the next day writing letters home, reading a bit, and went out for a couple beers with Larry after dinner. This, Mahard supposed, was the extent of his New Year's Eve festivities. As the new year rolled in, Mahard would be on the plane, finally on his last leg of the journey to reach the Land of the Rising Sun. 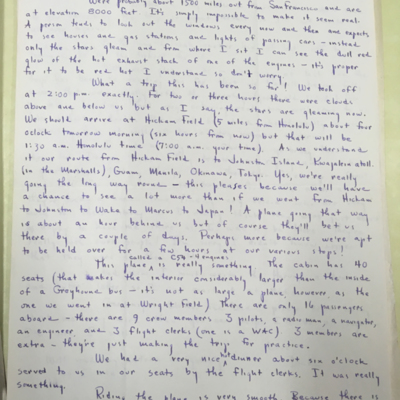 December 26, 1945: Mahard enjoyed his Christmas with the Harveys and explains the route he believes he'll be taking on the way to Japan. 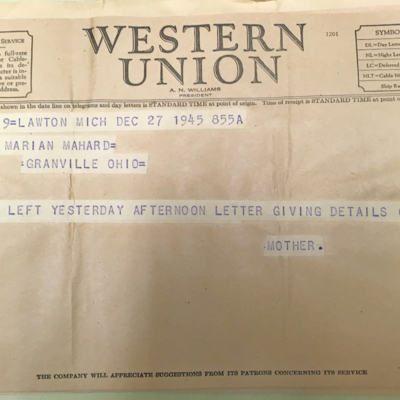 December 27, 1945: Telegram to Marian from Michigan that Mahard was on his way to Japan. 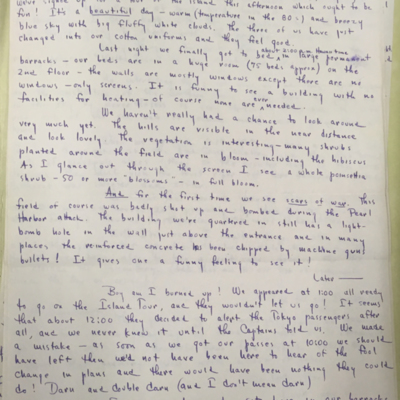 December 27, 1945: Mahard does his best to go sightseeing in Hawaii. 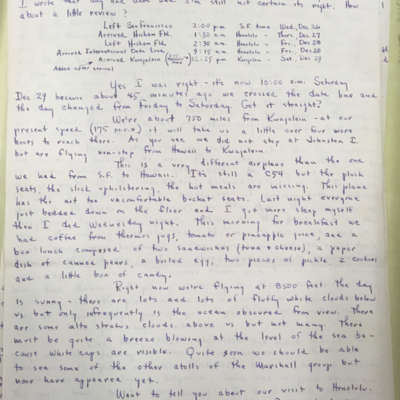 December 29, 1945: Mahard passes through and over the Marshall Islands. He manages to sketch Mitji Atoll from the plane. 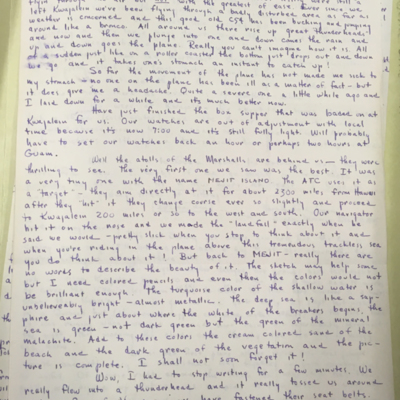 December 29, 1945: The group arrives in Guam after a turbulent flight from the Marshall Islands. 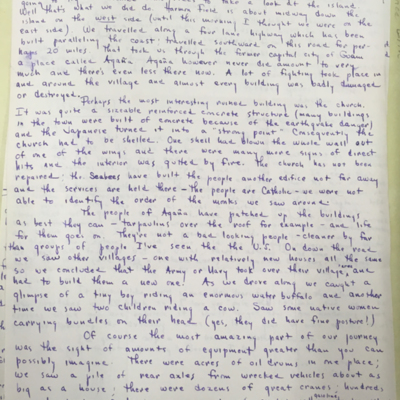 December 30, 1945: Mahard makes it over to Guam's capital to survey the extent of the damage inflicted over the course of the war. 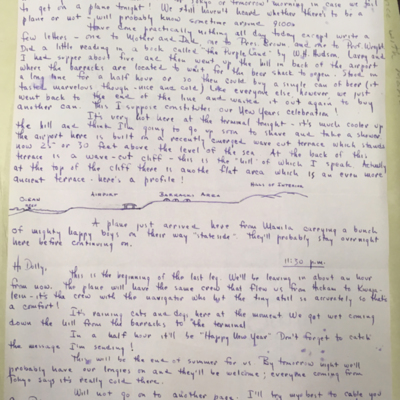 December 31, 1945: Mahard takes advantage of his unexpected extra day in Guam by reading, writing, and having a couple beers with Larry to celebrate the coming new year. 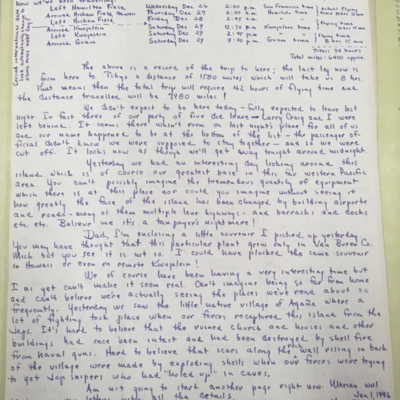 December 31, 1945: Mahard writes to his parents during his unexpected extra day in Guam.