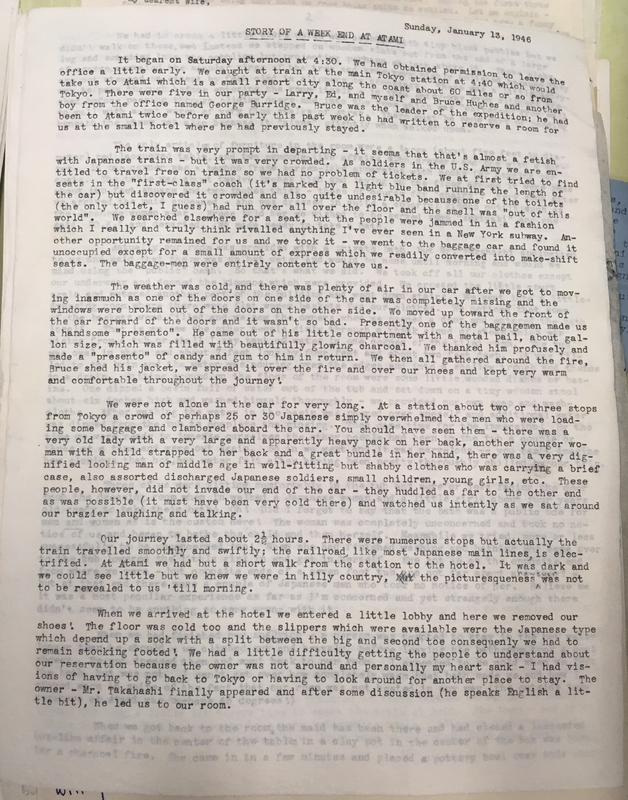 Perhaps the most ambitious trip by Mahard and his companions was a weekend journey to Atami. Larry, Ed, and Mahard, along with a couple other enlisted men they had become acquainted with named George and Bruce, were the members of the expedition. Bruce had been to Atami twice before, so he was the de facto leader of the group. Their train left exactly on schedule and the men did their best to settle in for the long ride. The cars were crowded, so they found their way to the baggage car and made themseleves at home among the workers on the train. One of the baggagemen even presented the group with a bucket full of red hot charcoal to warm themselves around. He was gifted with gum and candy for the show of hospitality. Eventually a large group of passengers joined the servicemen in the baggage car, but they kept to their own side.

Arriving in Atami, the group headed straight for their hotel. The room was sparsely furnished, but it was no worse than their quarters in Tokyo. The employees were very kind and made the men feel quite welcome. The men experienced the public bath house as their evening entertainment, soaking in the warmth of the hot water was a pleasant escape from the frigid winter weather. Upon their return, an employee prepared them a small meal of sukiyaki for dinner which the men supplemented with rations they had brought along.

The next day, the owner of the hotel stopped by and the payment of the bill was discussed. The men had thought ahead and brought along some goods to sell - candy bars, soap, cigarettes and the like - in order to pay their bill. By the end of negotiations they had made enough profit from the goods to pay for their room. So their trip was of no real cost out of their own pockets. After lunch, the men left the hotel to have a stroll through the city before they had to catch their train. Mahard admired the beauty of the countryside whizzing by as he rode the train back to Tokyo. How fortunate, he also thought, that this area was not leveled by bombs as Tokyo had been. 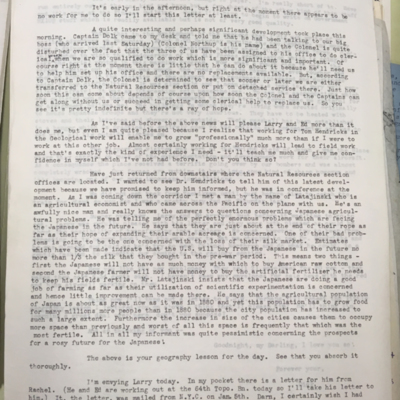 January 14, 1946: The colonel in charge of Larry, Ed, and Mahard would like to have them transfer, but would need replacements before that can happen. 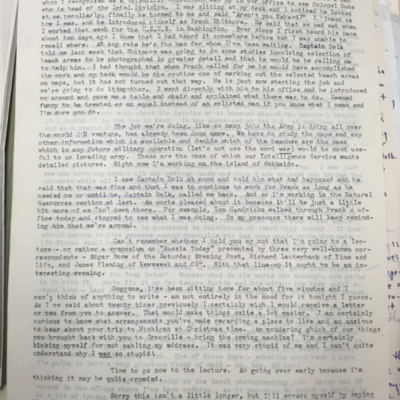 January 16, 1946: Mahard was asked to help with a beach mapping project in the Natural Resources section. 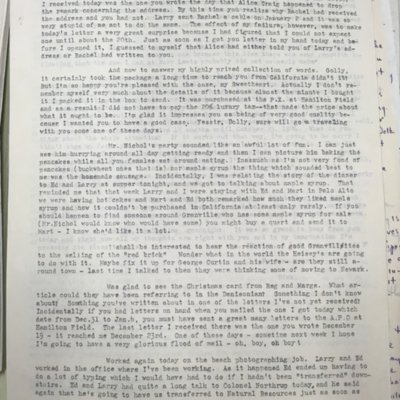 January 17, 1946: The first letters from home arrive in Japan and Mahard is thrilled. 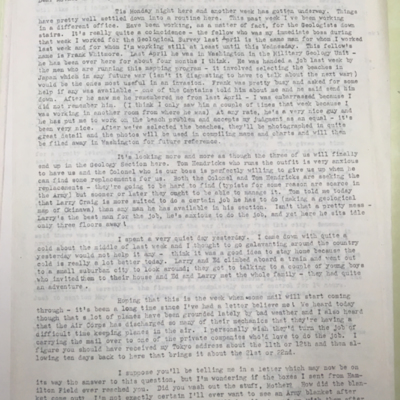 January 21, 1946: Mahard settled into a routine and believes the prospect of being transferred to the Natural Resources section is looking more likely. 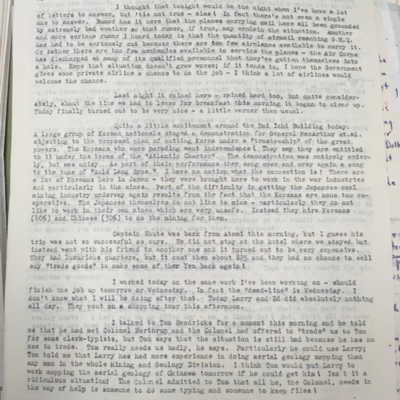 January 21, 1946: The colonel offered to trade Larry, Ed, and Mahard to Tom Hendricks for some typists. Hendricks has nobody to trade. 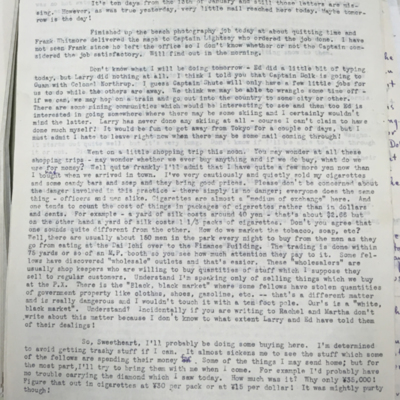 Upon their return to work that Monday, there was an interesting development. The colonel in charge of the captains had been thinking about the fact that Larry, Ed, and Mahard really would be better suited working in a different divison. To the colonel, it seemed a shame to have three scientists sitting behind desks and typing reports when they could be put to better use elsewhere. However, there could be no immediate remedy to this situation. Better suited elsewhere or not, the three men were needed by this outfit. Until such time as suitable replacements could be found, any serious consideration of a transfer to the Natural Resources section was nothing more than a slight possibility. The trio had already talked with Tom Hendricks, who worked in that office.

Surprisingly, it did not take long for Mahard to find an "in" at the Natural Resources section. Frank Whitmore, a brief acquaintance of Mahard during past experience at the United States Geological Survey (USGS), wanted Mahard to help with a project he was starting. Whitmore was tasked with selecting Japanese beaches that would be easiest to land troops on. If a future military operation made it necessary for an invasion of Japan, it would be useful information to possess. With the captain's permission, Mahard went down to the Natural Resources section. Hendricks even stopped by to see what Mahard was working on once he noticed Mahard was in the office. Mahard hoped that, if nothing else, he could finally put his education to work for the Army. His presence would be a reminder to Hendricks that the trio was interested in being transferred to this section, as long as everyone else could figure out the logistics.

And even better, the day after beginning work on the beach project, Mahard received his first letters from Marian. Receiving mail from home always brightened his day and made him feel a little less far away. It was just the sort of pick-me-up Mahard was looking for, and now it also gave him questions to answer in his own letters home. The colonel also continued to reassure Larry and Ed that he would like all three of the men to be working in the Natural Resources section. Always one looking to cut red tape, the colonel offered Hendricks to trade the trio for any decent clerks or typists. However, Hendricks was so short staffed that he did not have anyone to trade who fit that description. With Mahard finished with his beach project, it seemed as though Larry, Ed, and Mahard would be stuck behind typewriters for the forseeable future.