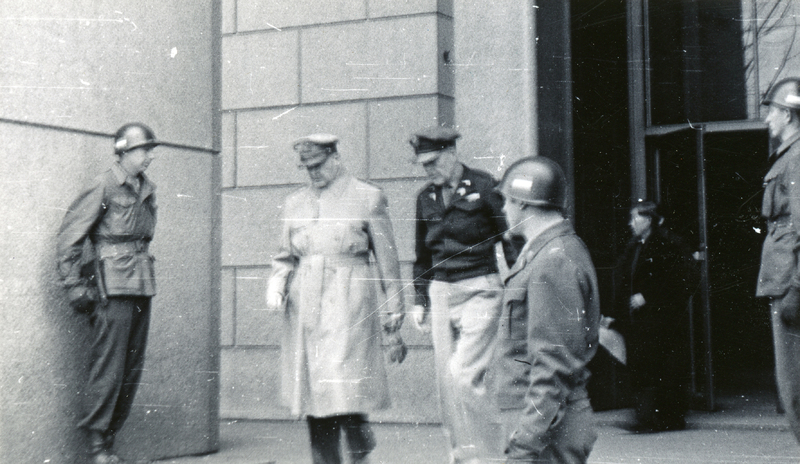 In Japan, Mahard's attempts to secure a discharge intensified. Mahard needed to figure out the logistics and the right time to present the matter to his military superiors. Mahard still hoped to be transferred to the Natural Resources section by the spring and thought they might be more sympathetic to his case than Mahard's colonel. Furthermore, the captains were doing their best to secure promotions for Mahard and his two friends. If nothing else, there was now something a bit exciting and tangible to look forward to as long as Mahard was stuck in the Army.

Larry, Ed, and Mahard still enjoyed going on the odd adventure here or there in their free time. Ed always seemed to be the one most anxious to be doing something. On a particularly rainy Sunday, Ed managed to convince the rest that they should try to make the best of the free day. They traveled to the city of Chichuba by train. Eventually the cold and the rain got the better of the group, and they decided it would be best to call it a day and head back to Tokyo.

The day after the somewhat uneventful train trip, Mahard got to check quite a big to-do off his list. General Douglas MacArthur was the general in charge of operations in Japan. His headquarters were in the Dai Ichi Building in which the mess hall and free movie theatre that Mahard frequented were located. Mahard once delivered some hot beverages to the general's office and once unknowingly shared an elevator with the man himself, but had yet to see him in a situation where he was able to snap a photograph. But on January 28, 1946, Mahard finally got his chance. While walking by the Dai Ichi Building, Mahard noticed that MacArthur's Cadillac was waiting out in front with a large crowd gathered around who were waiting for the general to emerge. Mahard, with a decent spot to snap a photo and knowing if he walked away that would almost certainly be the moment MacArthur emerged from the building, waited for his chance. After just over an hour of waiting, MacArthur appeared, accompanied by a major. There was no great spectacle to the affair, MacArthur simply returned the MP's salutes, quickly surveyed the crowd, and hopped in his car. "So let it be known far and wide" Mahard wrote, "I've seen MacArthur! Yipee!" 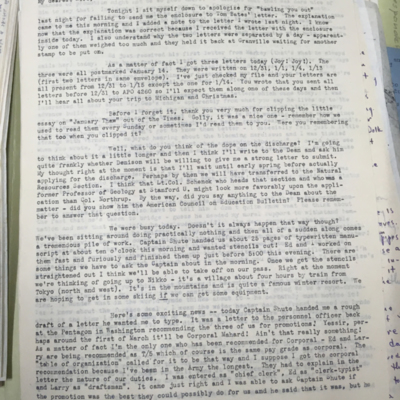 January 26, 1946: Mahard updates Marian on his plan to get a discharge. 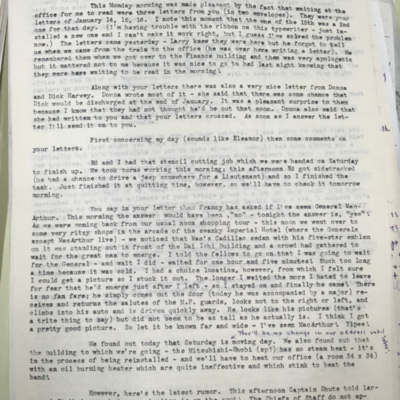 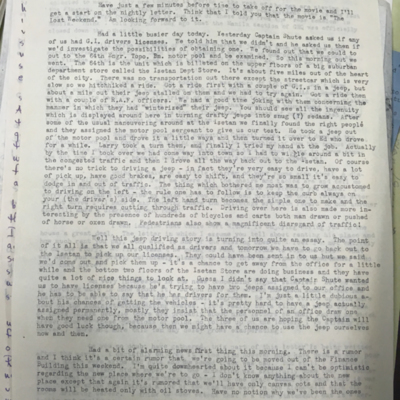 January 31, 1946: The captains want the men to get G.I. Driver's Licenses and Mahard hears rumors of moves. 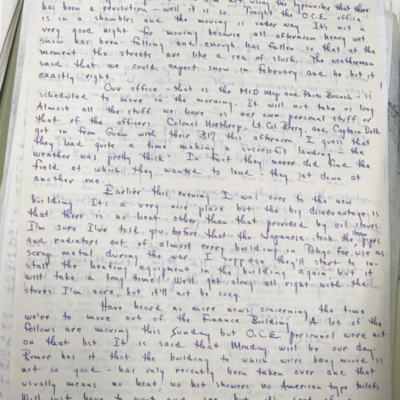 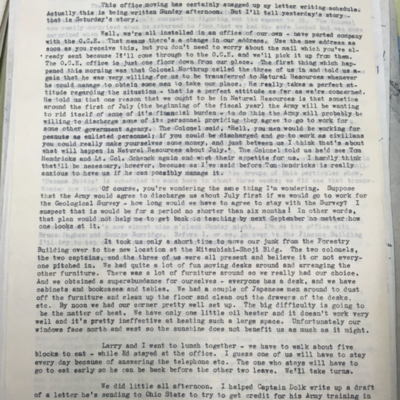 February 2, 1946: Mahard and the gang are all settled into the new office building. 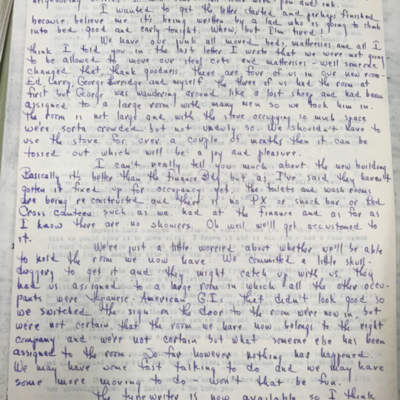 February 11, 1946: Mahard is moving to new sleeping quarters in a different building. 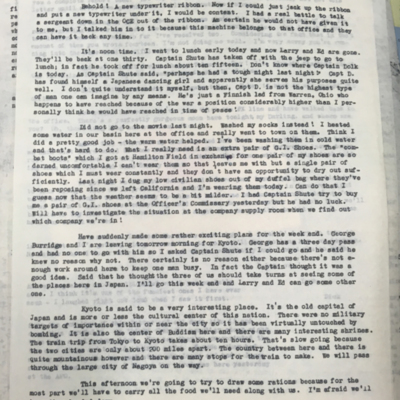 February 14, 1946: Mahard and George plan to go to Kyoto that weekend. 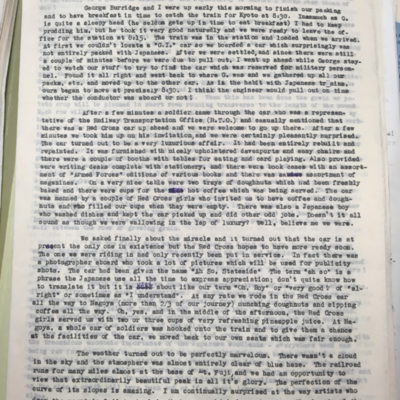 To Move or Not to Move

The end of January brought about the first snow of the year. With it returned a roll of film Mahard had developed and the disappointment that most of the images did not turn out well. Tokyo also experienced a minor earthquake in the middle of the night which awakened Mahard and his roommates. It took Mahard a moment to realize what it was, but he reassured everyone that they would be alright. The captains also had Larry, Ed, and Mahard take their G.I. Driver's License test. The captains hoped to have a couple jeeps assigned to their group and needed to be able to say that they had drivers to go with them. Rumors also began circulating at the beginning of February that the men would be moved out of the Finance Building into a building with no central heating. Their office was moved from the Forestry Building to a newly occupied building down the street before that could happen. This building also did not have central heat, instead relying on gas powered stoves that spewed soot, coating the entire room.

It took well over a week after the rumor first reached Mahard's ears, but the men were eventually moved out of the Finance Building as well. Larry, Ed, and Mahard were a bit sneaky and decided to occupy a small room that seemed to be vacant instead of moving into the overcrowded room they were officially assigned. Their friend, George, was wandering the halls and seemed a bit lost, so they welcomed him in. Their section also got one jeep assigned to them, which was surprising considering the Army could apparently not find a better typewiter or even some ribbons for them. The captains planned to use the jeep to commute from their quarters to work, but Mahard figured that the trio would occasionally be able to take it for a spin when they were out on a pass. 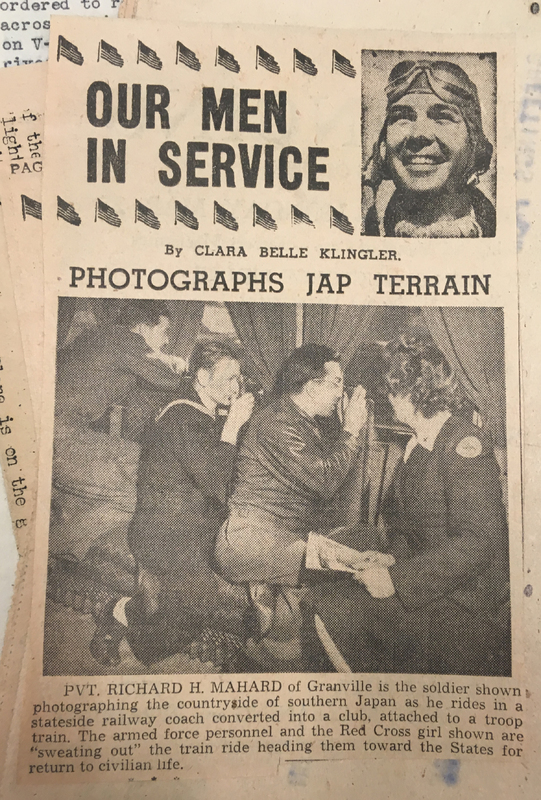 Mahard, not headed home, but in the "Ah So, Stateside" in a staged photo. 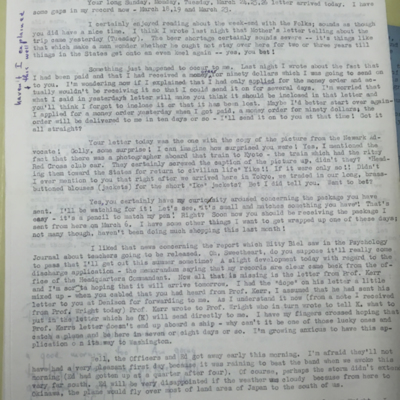 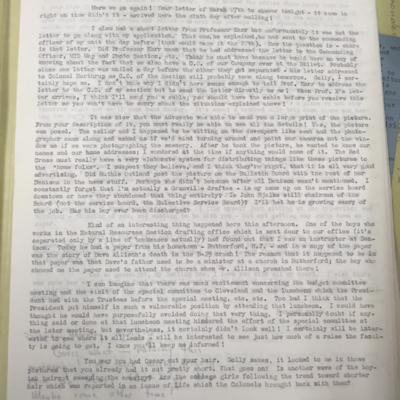 In mid-February 1946, Mahard discovered George had a three day pass and nobody to accompany him on a trip. Mahard and his captain decided it would be good for him to see more of Japan, so Mahard told George that he would go along. George and Mahard decided they would venture to Kyoto, the historic capital of Japan. Since it held no political or military importance, it had remained untouched by the bombing raids in World War II.

On the train to Kyoto, a Railway Transportation Office representative told the pair that there was a Red Cross car farther up. George and Mahard decided it might be worth a look, so they went to check it out. They were sure glad they did. The car was named the "Ah So, Stateside" with "ah so" being a Japaneses term to express thanks, according to Mahard. The train car was quite luxurious, and donuts and coffee were served to the troops. George and Mahard were quite lucky to have stumbled upon it, as it was apparently the first such car the Red Cross had created with more hopefully being rolled out in the future. When a train car full of troops was attached to the train at a later station, Mahard and George retreated back into the regular seating in order to let the new arrivals enjoy the "Ah So, Stateside."

The weather was fantastic; the pair watched the farmers tend to their fields as the countryside rolled by. Upon their arrival in Kyoto, they found accommodations at the Army Rest Center and settled in for the night.The next day, George and Mahard were out and about, enjoying the awe inspiring architecture of the ancient temples. They also looked around the local shops before it began raining. The duo was able to make it over to the old palace grounds before heading back to their room as it began to snow.

Mahard had noticed some newly painted murals in their hotel when they first arrived, but had refrained from sharing this with Marian because it had required further investigation to uncover the whole story. While admiring the murals, Mahard noticed the signature of "John Taylor" and was suddenly convinced that this was the same John Taylor who had taught art at Denison in 1943-1944. After Mahard described the John Taylor he knew to an employee and was told that his description matched the painter of the mural, he called around to other hotels trying to find his acquaintance. Eventually Mahard got lucky and left John Taylor a message. On their last day in Kyoto, John Taylor paid George and Mahard a visit, sharing the story of his work with a U.S.O. Campshow organization of artists. After bidding the artist goodbye, George and Mahard boarded the train. Sadly, there was no "Ah So, Stateside" this time. But Mahard was surely glad that George had been welcomed in as a roommate if he had not already thought so before.