This exhibit focuses on 72 manuscript leaves from the Denison University Archives & Special Collections. The criteria that was used to choose which leaves were included in this exhibit were as follows:

Of the 72 manuscript leaves, 47 of them are from Denison's copy of Otto Ege's Fifty Original Leaves from Medieval Manuscripts. This volume of leaves has been one of the most studied groups of medieval manuscripts leaves and many academic institutions hold a volume, though each set contains different leaves than the other. 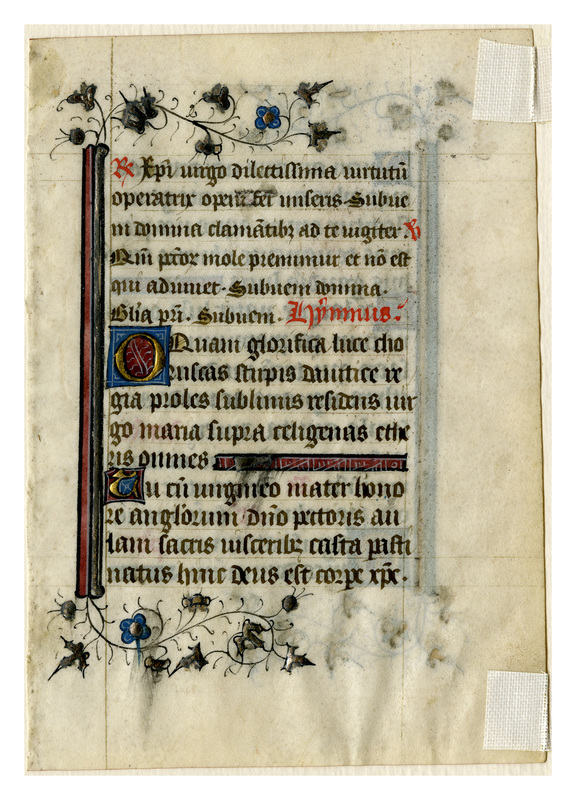 Biblioclasts such as Otto Ege saw a unique opportunity to take manuscripts that were already damaged or in disrepair and turn them into teaching tools.  Ege separated these leaves from their books and included fifty unique leaves in each of the volumes which were marketed to learning institutions. It was Ege's hope that by sharing these manuscript leaves, he could inspire bookmakers to regenerate the creativity of bookmakers in the past.

Much of the information about these items, especially those that had been Otto Ege's manuscript leaves, was provided by Denison professor Dr. Fred Porcheddu-Engel who teaches courses on medieval and Early Modern British and European literature, as well as on the history of the English Language and the works of J.R.R. Tolkien. Of specific note is Dr. Porcheddu-Engel's Otto Ege site which has digitized, translated, and made accessible information about the leaves within Ege's Fifty Original Leaves from Medieval Manuscripts held at twelve different institutions, including Denison.

This project was a byproduct of Denison's commitment to being a founding partner of manuscriptlink, a forthcoming resource for scholars, librarians, and teachers that seeks to reunite digital images of dismembered and dispersed medieval manuscript leaves into virtual codices.  This innovative project will result in a worldwide “collective collection” of virtual manuscripts from ca. 800 to ca. 1600, drawn from thousands of individual manuscript constituents held by its international partners. Manuscriptlink is led by co-directed by Dr. Scott J. Gwara, Professor of English, University of South Carolina, and Dr. Eric J. Johnson, Assistant Professor and Associate Curator, Rare Books & Manuscripts Library, The Ohio State University Libraries.

The imaging and this exhibit were created by Kelly Francis-Love with support from Sasha Griffin.  If you have questions about the material you see here or would like to see any items in person, please contact archives@denison.edu.

View All Medieval Manuscript Leaves →
About this exhibit