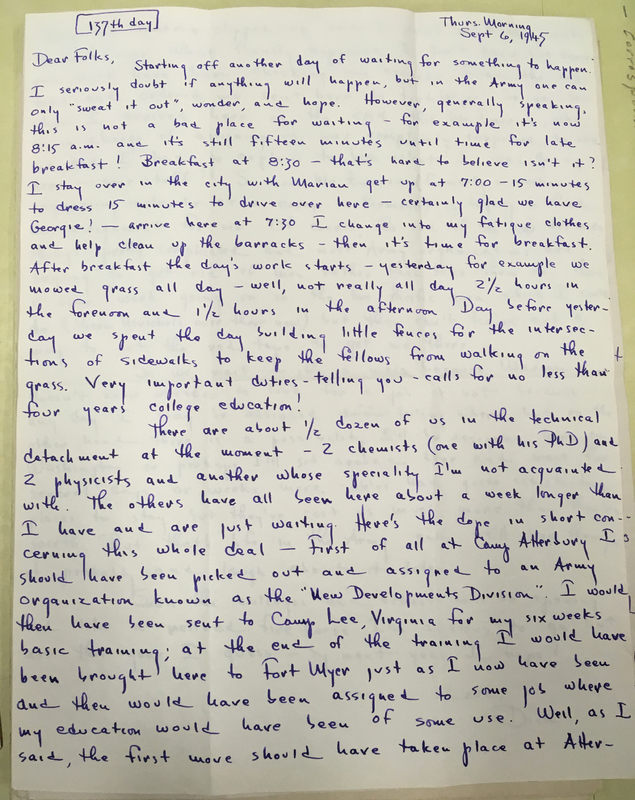 September 6, 1945: Mahard commenting on the fact that his education is going to waste in his current job. He has also learned that he should have been sent here, Fort Myer, instead of Fort Lewis.

Before coming to Fort Myer in Virginia, Mahard certainly had strong opinions about how the Army operated. Mahard believed the Army would pass anyone with a pulse through the physical exams, there was too much red tape for simple matters, and everything was far from consistent and efficient. Arriving at Fort Myer only strengthened Mahard's convictions. As it turned out, Mahard should have been assigned to the "New Developments Division" while at Camp Atterbury in Indiana and then sent to Camp Lee in Virginia instead of being sent to Fort Lewis all the way in Washington state. After his basic training, Mahard would then have been sent to Fort Myer and given a job that utilized Mahard's education. "Very important duties - telling you - calls for no less than four years college education!" Mahard once wrote to his parents, tongue firmly in cheek, after telling them about his day performing such menial tasks as mowing the lawn and building fences to keep men from walking across the grass.

To be fair to Mr. Emerson, Mahard's superior at Fort Myer, it would seem he was just as unaware of the situation as Mahard had been. Upon Mahard's arrival on August 28, 1945, Mr. Emerson was unable to find proper work for Mahard. The end of the war meant that the Army's organizations were trying to downsize, not bring on new men. So Mahard spent his days picking up cigarette butts and other trash off the sidewalks, waiting for an opportunity. But it was not a total loss, Mahard was now able to spend much of his time with Marian. The Mahards had a little place in the city nearby and Mahard was able to spend the night there, commuting every morning to the fort in Georgie, the sedan the Mahards had purchased in Washington state. During his time at Fort Myer, Mahard also began investigating the possibilty of obtaining a discharge from the Army. Mahard had heard rumors that academic institutions were helping their former teachers get out of the service by stating the importance of the instructors' work. Mahard immediately sent letters to Professor Wright and President Brown to see what they could do.

With Marian and Mahard living together, Mahard had significantly less time to write letters. His correspondence was the occasional letter Mahard wrote to his parents back in Michigan. The letters often lacked specifics of his time at various jobs in the area. What seems to be most clear from Mahard's time in Virginia is that he was constantly unclear what his future would hold. Mahard apparently worked for a period of time on a hydroponics research project at Fort Myer which investigated whether food for troops could be grown without soil. Mahard was also transferred, along with fellow servicemen Larry Craig and Ed Eakland, to Fort Belvoir, Virginia. Mahard then wound up learning how maps are copied and printed while working in the Pentagon Building after he, Larry, and Ed had been sent there on a pass for a few days. At the beginning of December 1945, Mahard and Marian found time to make it up to Granville for a weekend. Mahard had to leave Marian behind in Granville and took the train back to Fort Belvoir. From there, Larry, Ed, and Mahard were sent back to Fort Myer and as soon as they arrived, made preparations to leave.

At some point during Mahard's stint in Virginia, he received orders that he would be sent to Japan. Larry, Ed, and Mahard would travel to Hamilton Army Airfield, near San Francisco, California, to catch a plane. Mahard was headed west again. 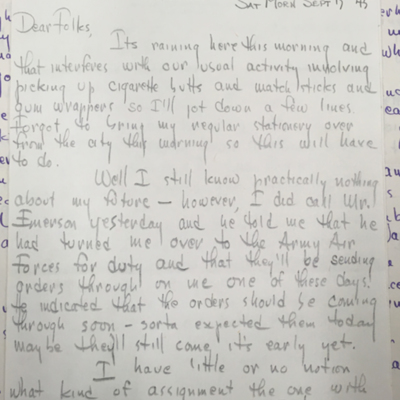 September 15, 1945: Mahard talking about a possible project involving soil. Mahard is unsure what to expect from the project. 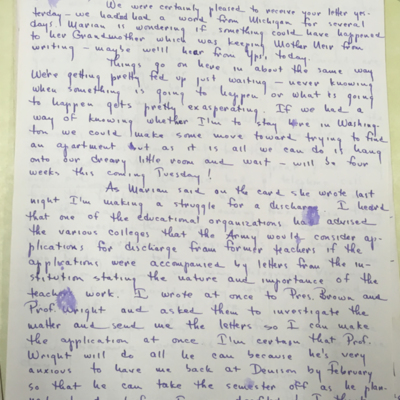 September 22, 1945: More waiting around for Mahard. He has also begun looking into the possibilty of a discharge from the Army. 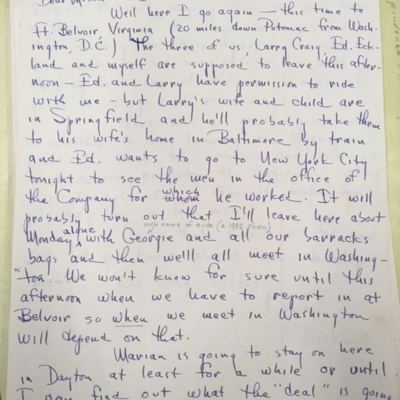 November 9, 1945: Mahard is transferring to Fort Belvoir, Virginia, along with Larry and Ed. 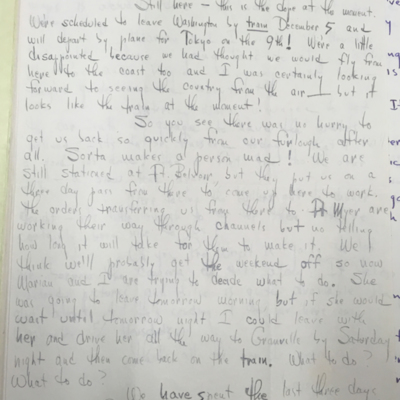 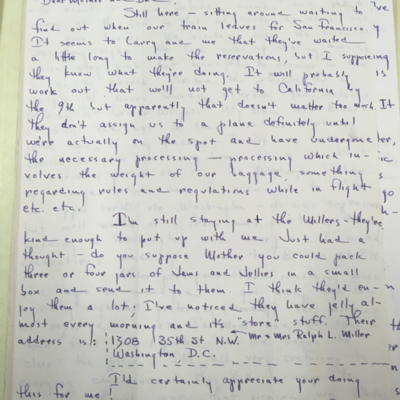 December 4, 1945: Marian is back in Granville. Mahard will be leaving for California on his way to Japan soon.