Japan - Land of the Rising Sun 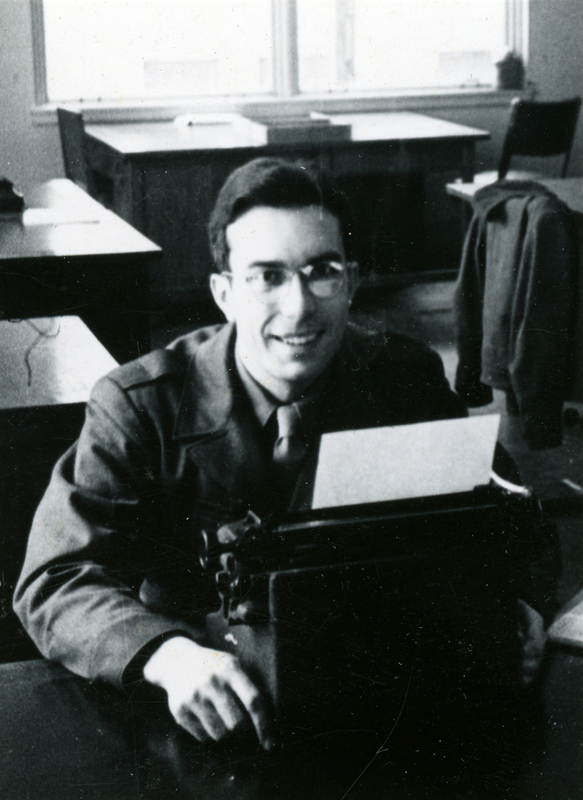 Mahard working as a typist in Japan while in the Army.

Mahard arrived in Japan on January 1 of 1946. The very next day he was already set up in his office. Mahard barely had time to get his new address sent off to Marian so he could start receiving the news from home as soon as possible. What struck Mahard the most about his new surroundings was the vast and indescribable destruction he saw all around. For miles upon miles Mahard saw the burned out remains of a once bustling metropolis from of the bus window as he left the airport. Handfuls of people were sifting through the rubble to find bits of corrugated metal to construct makeshift shacks, and children were playing in the ruins.

Larry and Mahard finally arrived at the Dai Ichi Building, which served as General MacArthur's headquarters. The duo found someone who could point them in the right direction. They were told that they would be staying in the Finance Building, but since it was a holiday Larry and Mahard were just put in a room until more permanent accommodations were determined. Larry and Mahard, with nothing better to do, ventured back into the city. It was quite cold, and it probably seemed even colder considering that the pair had been in Guam just the day before. Larry and Mahard eventually ran into one of their captains who welcomed them to Japan and told them to meet with the rest of the group at 9:00 am the following morning. As they bid the captain goodnight, the cold weather began to pierce through Larry and Mahard's coats. They retired to the mess hall to enjoy a rather lavish meal. Ed stopped by and caught up with his two pals, sharing with Larry and Mahard all the information he picked up during his extra day in Japan. Soon after Ed took off, Mahard decided to hit the hay a bit early after his long first day. 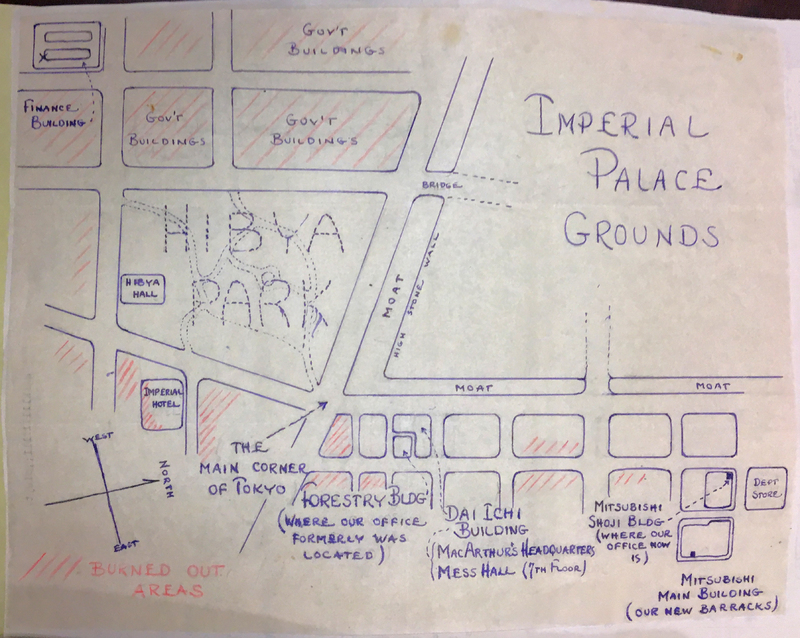 Hand-drawn map of Tokyo by Mahard showing important buildings during his time there. 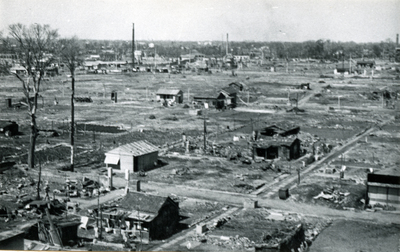 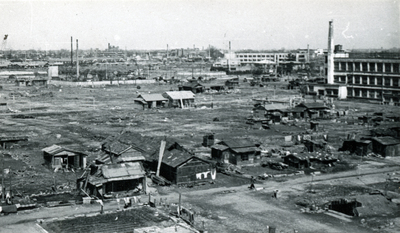 The rubble is slowly replaced with shacks constructed by hand out of the debris.

The next morning, Mahard awoke at 5:30 am and laid in bed for a few moments. When he decided to get up, Mahard had to walk all the way down to the basement of his building. The Finance Building held the sleeping quarters. The only hot water available to the troops was down in its basement. Mahard found a helmet on his way to get hot water and filled it up so he could shave. It was another cold day in Tokyo; Mahard could see his breath as he stood in the wash room shaving. Mahard then woke up Larry and they had an early breakfast at the mess hall in the Dai Ichi Building before heading over to their meeting with the captains in the Forestry Building. The news was not too surprising for Mahard, the captains would not be setting up their own office for a few weeks. In the meantime, Larry, Ed, and Mahard, were given jobs as typists. As far back as Fort Lewis, Mahard had been typing forms and reports under the command of Uncle Sam. All that seemed to change was the scenery and the distance from home.

Mahard earnestly worked at assignment after assignment as he pounded at the typewriter day after day. Some days it was forms, other days it involved lots of numbers, and sometimes the work was a headache of a task that seemed like it should be someone else's job. Mahard was there to get hands-on experience with military correspondence. Some slightly unrelated work was expected, but sometimes it got to be too much. Eventually, Mahard was assigned military correspondence work more consistently which had been promised from the start. Mahard also did a couple jobs for one of his captains. Mahard typed instructions and cut out a few stencils. But of course, even with all the work as a typist, Mahard and his pals found plenty of time to go on adventures.

Sometimes the men would catch a movie. The films were 16mm, and Mahard noted the lesser quality next to the standard 35mm shown in American cinemas at the time. But, the movies were free so it was hard to complain too much. The trio would also often peruse the wares being sold by the local Japanese peddlers. Inflation of the Yen meant most items were too expensive to be very tempting. However, the men would occasionally see a nice trinket purchased by a serviceman gathering souvenirs before heading home and so they kept their eyes peeled for a good price. The trio would also take an occasional trip to a local establishment. The local cinema was off limits for troops, along with the more traditional form of theatre in the city, but there were dance halls where local women came to dance with the soldiers for a fee. Mahard and his two friends were there more to observe than to actually take part. There were much more exciting outings to come. 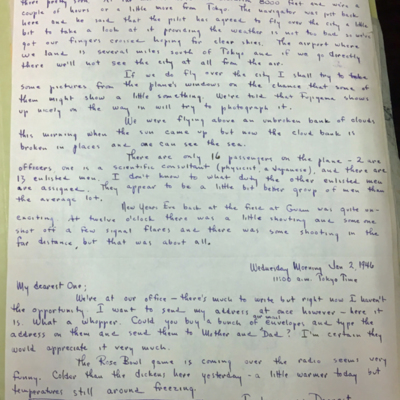 January 1, 1946: Mahard is in a plane headed to Japan. He will arrive later that day. 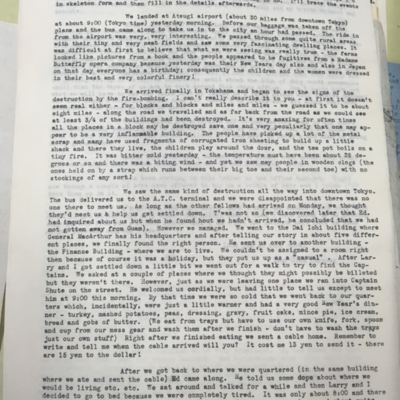 January 2, 1946: Mahard witnesses the devastation in Japan and begins getting settled in his new quarters. 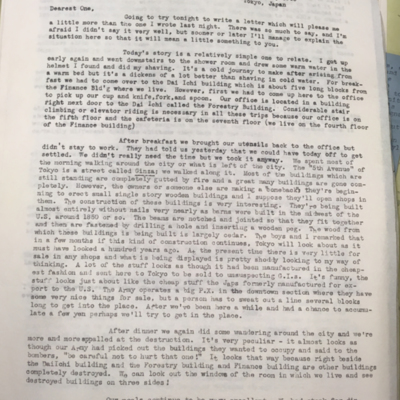 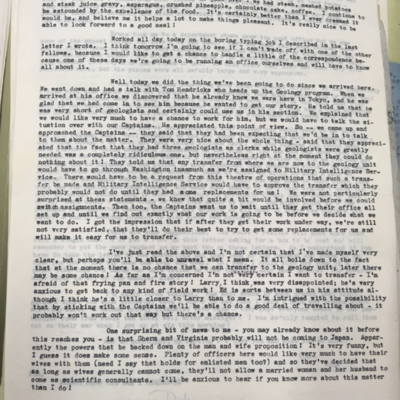