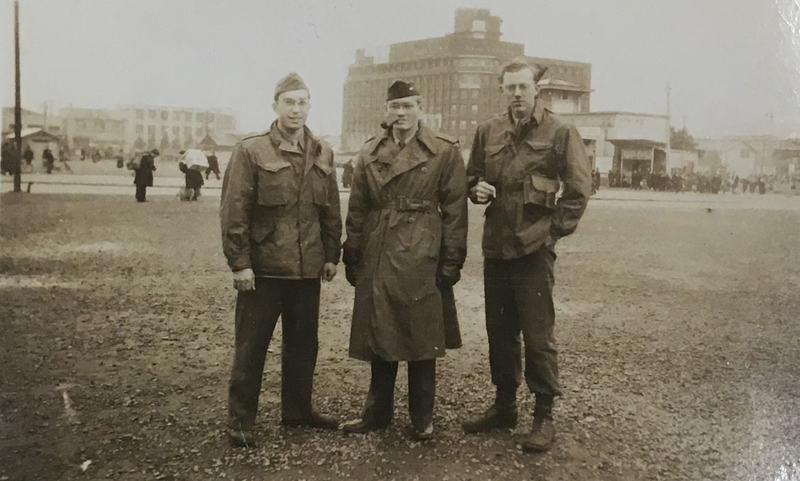 Mahard (left) while in the Army. The photo seems to be taken in Japan, so one assumes the men with him are Ed and Larry. But, this is unconfirmed.

Hoping for a Discharge

By the end of February 1946, Mahard was really longing to return home. Mahard discussed the details of his greatest wish: to return in time to resume teaching at Denison for the fall semester. Mahard heard of rumors that the United States Geological Survey (USGS) was desperate to find men to fill their ranks. Tom Hendricks, the man that Larry, Ed, and Mahard hoped could secure them a transfer to his section, said he could try to get the trio out on a contract with the USGS. However, this would likely result in a long obligation to remain employed by the USGS and would take serious time to work its way through the proper channels. There was also no real guarantee that it would work at all. Mahard thought it was best to turn down the offer by Hendricks, even if it was his first real promise of a way out. Mahard kept his ear to the ground for better opportunities and frequently corresponded with Dean Richards, Professor Wright, President Brown, and Professor Kerr, an old friend of Mahard’s. Mahard hoped that the support of these men, along with Marian being Dean Richards' typist, would give him the greatest shot of getting out of the Army.

Mahard was not very optimistic about his chances for quite some time. It would not be until near the end of March 1946, after receiving Dean Richards' assurance that Denison was doing all it could to get him out, that Mahard dared to think he might just make it out of the Army in time to teach that fall. This backing from the Dean made Mahard confident enough to take the next step, writing a letter to Colonel Northrup. Colonel Northrup had also been a straight shooter to Larry, Ed, and Mahard and seemed to do all he could to cut red tape whenever he could. While the colonel would surely miss Mahard and have a hard time finding a replacement, Mahard knew he would do all he could to help. By early April, Mahard would be mailing off his discharge application. Inside that envelope was the colonel’s endorsement, kind words from friends and colleagues alike, and all of Mahard’s hope for a return to the life that he was forced to leave almost an entire year prior to this time.

Around the same time as Mahard began seriously considering applying for a discharge, there was trouble at home: Georgie had sprung a leak. This was not Georgie’s first need of repair since being owned by the Mahards. While the Chevrolet had made good time across the United States on the Mahards' journey from Fort Lewis in Washington state to Fort Myer in Virginia, it appeared his time was coming to an end. Georgie was sold. The hunt for a new car, most likely a Plymouth by Mahard’s clear affection toward them in his letters to Marian, began. With no known letters of Marian sharing the circumstances of Georgie’s sale, whatever became of that 1935 4-door sedan that brought Mahard a little closer to home is a mystery. 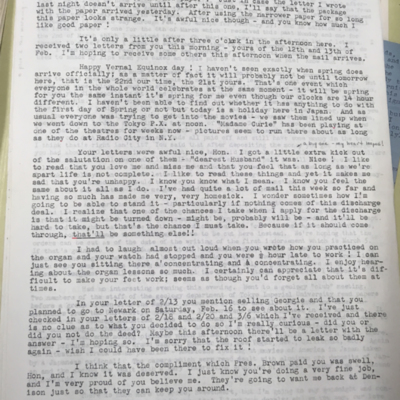 March 21, 1946: Mahard learns that his first promotion would be finalized soon. 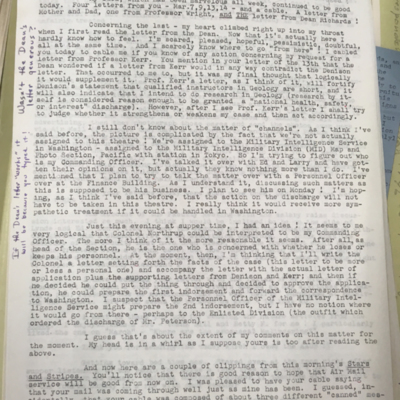 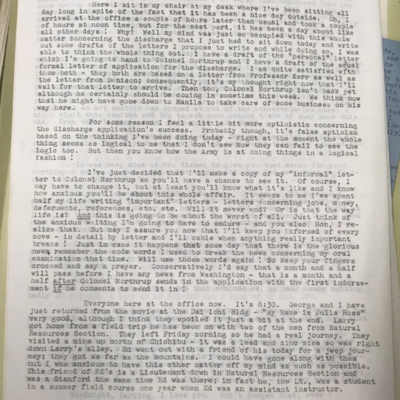 March 24,1946: Mahard is making progress on his discharge. 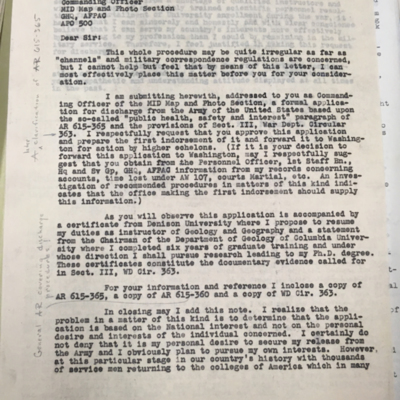 March 24, 1946: Mahard's first draft of the letter to Colonel Northrup. 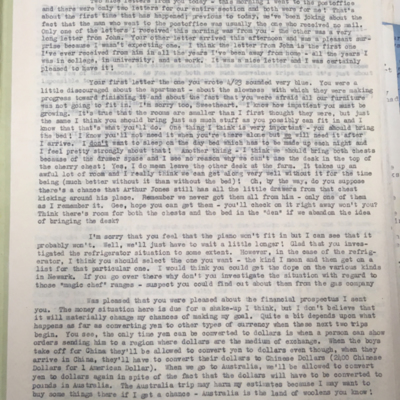 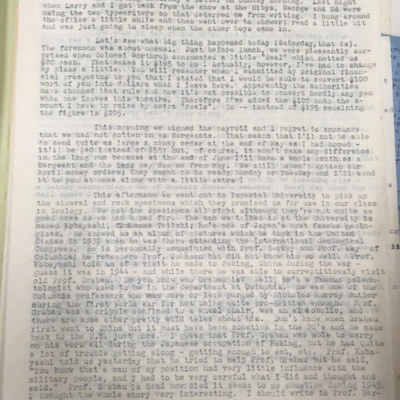 May 11, 1946: The trio goes to Imperial University to borrow some mineral samples. 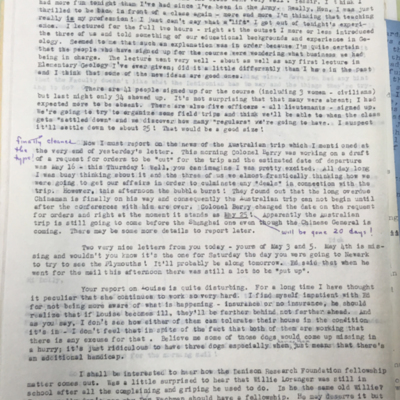 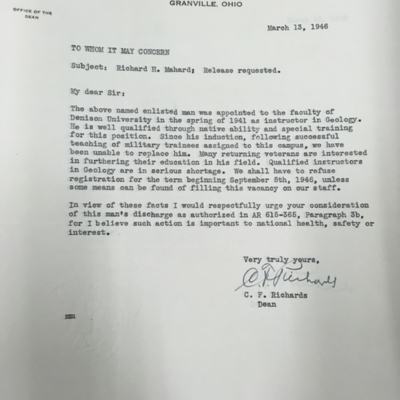 The letters from Dean Richards' which assured Mahard that Denison would help secure his discharge.

As promised by his superiors, Larry, Ed, and Mahard were all given promotions. In late March 1946, Mahard was made a corporal. Mahard’s superiors then turned right around and put in a request to have the men promoted again, and Mahard was made a staff sergeant. Mahard obviously always wished that Marian could be with him. But Mahard wished especially hard the night he found out he was to be a sergeant. He wished Marian could be there to sew the chevrons onto his uniform.

Probably what Mahard missed the most, second to his wife, Marian, was teaching. Mahard would relate little tidbits of random lessons in letters home to Marian from the geography of the places he had visited to the agriculture of Japan. Mahard bought geology books in Japan and would always excitedly write home when he got to work on a project involving a map. On April 23, 1946, a year to the day of his official start in the Army, Mahard got his chance to teach once more. Colonel Northrup and Colonel Berry, the other colonel in charge of Mahard, Larry, Ed, and the captains, mentioned to a Major that they had geologists working for them. As it so happened, the Major was trying to put together a Physical Geology class at the Tokyo War College and was interested to know if the trio would be willing to teach. After some discussion between Larry, Ed, Mahard, and the lieutenant sent on the Major’s behalf, the men agreed. There was no additional pay for the work, but they were promised that the War College would help them gather needed teaching supplies. Larry, Ed, and Mahard got to meet Professor Kobayashi, “one of Japan’s most famous geologists,” while picking up some mineral samples from the Imperial University. Professor Kobayashi was familiar with a few professors at Columbia University which Mahard had known and had many stories from his years traveling abroad.

The class went rather well. Forty-one people had signed up, including three civilian women, and 34 showed up for the first day of class. Mahard had expected more to be absent, so was quite pleased to have so many pupils in his classroom. Mahard hoped to organize some field trips once things got settled down and the exact number of truly committed students could be ascertained. In a letter home on May 13, 1946, Mahard shared his positive experiences with Marian.

Just home from “school” and the class went very well! Yessir, I think I had more fun tonight than I’ve had since I’ve been in the Army. Really, Hon, I was just thrilled to be back in front of a class again – more and more I’m thinking that teaching really is my profession! I just can’t say what a “lift” I got out of tonight’s experience.