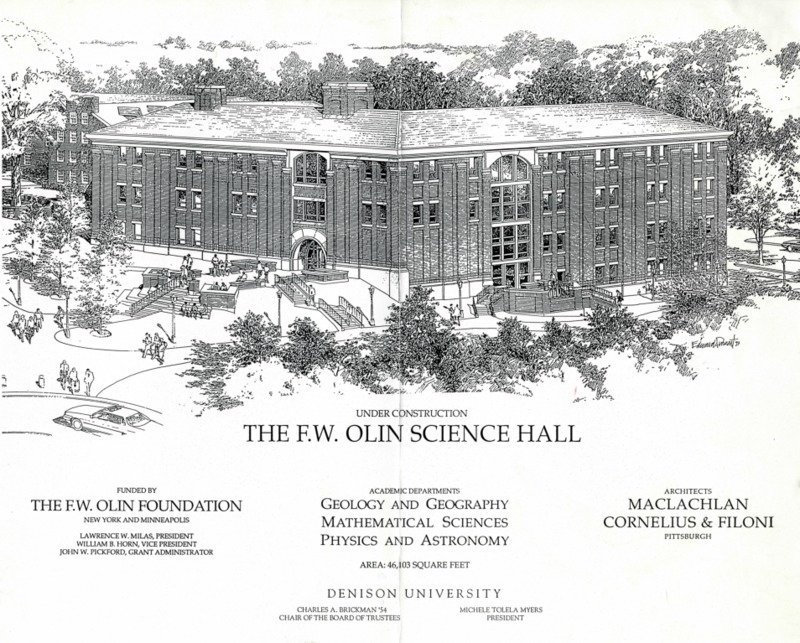 Barney Memorial Science Hall was the first significant building devoted as the primary center of the scientific community of campus. Built in 1893 and rebuilt after a 1905 fire destroyed much of the interior, Barney no longer met the technological needs of the departments by the mid-1900s. The Life Science Building, erected in 1941, housed the Biology Department, and Ebaugh Laboratories had begun housing the Chemistry Department in 1966. Geology & Geography, Astronomy & Physics, and the Mathematics Departments were in desperate need of new lab space.

In the mid-1980s, Denison University began vying for a very selective grant from the F.W. Olin Foundation. Denison was unsuccessful in 1988 in securing one of the two grants given out every year to the 60+ schools who applied. Although Denison had made it into the top 20 candidates, they were in the middle of transitioning from President Andrew De Rocco to President Michele Tolela Myers which was a factor in not receiving the grant. Denison University applied for the grant again in 1990 and was denied again. However, the foundation encouraged them to keep applying. Finally, in 1992, Denison was awarded the largest gift in its history up to that point: $6.1 million dollars for the construction of a new science building.

I am pleased to announce that the F.W. Olin Foundation has agreed to make a grant to Denison University of $6.1 million to construct and equip a new science building…

Recently I saw that a USA Today survey named Denison students as the best looking in America. I want you to know this had nothing to do with selecting Denison for this grant. Besides I found that the survey made a mistake. It really intended to say that Denison has the best looking science students…

-Lawrence W. Milas, President of the F.W. Olin Foundation, announcing that Denison was to be awarded a grant on October 1, 1992

The spot directly across the road from Curtis East was chosen for the new science building funded by the F.W. Olin Foundation. Ground was broken on April 16, 1993. The construction site was just a stone’s throw away from Ebaugh Laboratories’ Herrick Hall, named after former professors C. Judson Herrick and his older brother C.L Herrick. C.L Herrick had been the head of the geology department in its infancy and had helped push for the construction of Barney Memorial Science Hall roughly a century prior. 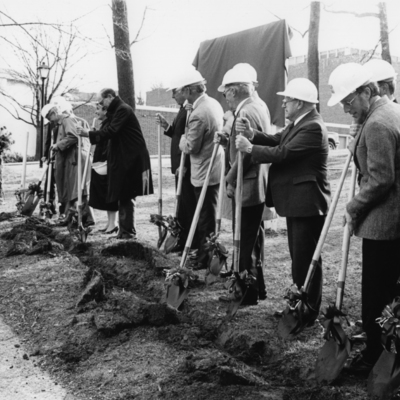 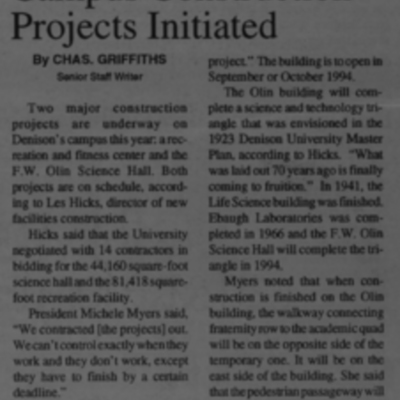 September 9, 1993: Construction has begun on Olin. 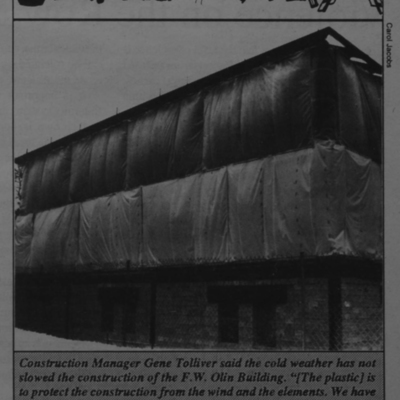 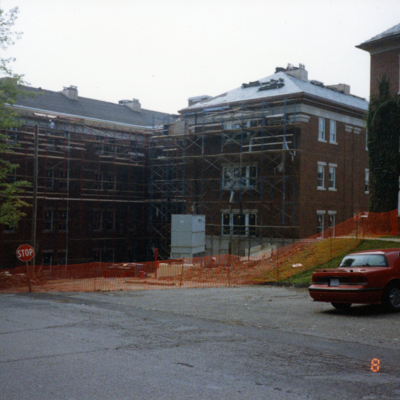 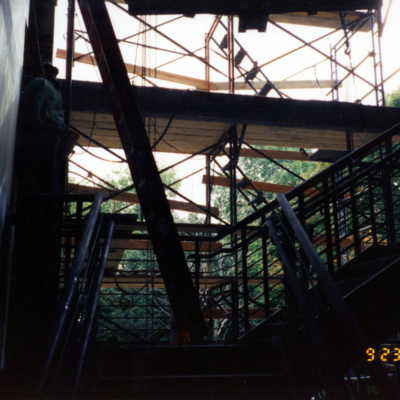 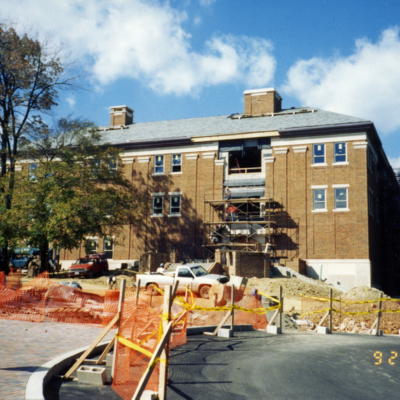 September 29, 1994: Front of Olin during construction. 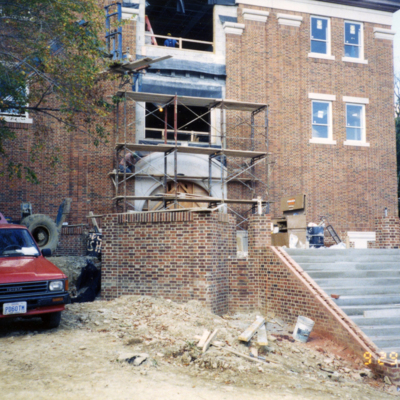 September 29, 1994: Entance to Olin during construction. 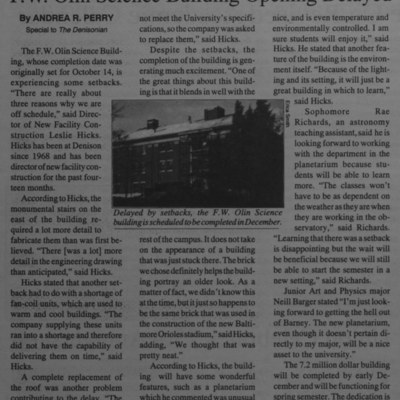 November 3, 1994: Olin construction has been delayed. 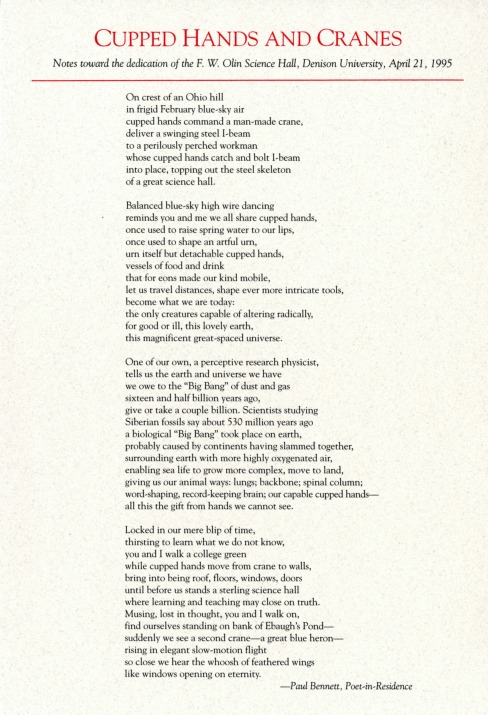 Poem by Paul Bennett for the dedication of the F.W. Olin Science Hall.

“before us stands a sterling science hall” – Paul Bennett

The departments moved into the new science building in December of 1994. For the first time in over 80 years, Barney Memorial Science Hall was essentially empty – and no longer the home of any science departments. The ribbon cutting ceremony was performed on April 21, 1995. Paul Bennett, the poet in residence, presented his poem entitled Cupped Hands and Cranes marking the dedication of the F.W. Olin Science Hall.

The Geology and Geography department became the Geoscience Department in 2006. The planetarium in the basement continues to be used both by students and for community building events with Granville organizations. Tour guides walk by and never fail to mention the irony of the earth-based Geoscience Department residing on the top floor, while the Physics and Astronomy classrooms can be found in the lower levels teaching students about the planets and stars high above.