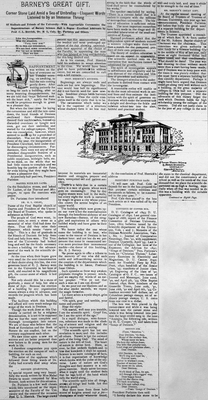 In 1892, Eugene Judson Barney, a Denison trustee, offered to pay for the construction of a building devoted to the science departments on campus. The University jumped at the offer, possibly because professors such as C.L. Herrick of the Geology Department had been campaigning for a new facility with better lab space and more room. The building was to be named in memory of E.J. Barney’s father, Eliam E. Barney, who was a former trustee of Denison himself. Barney Memorial Science Hall was to be built on the slowly growing academic quad and in line with the Doane Academy building which was also funded in 1892 by William Howard Doane. Construction of the roughly $40,000 science building was in full swing by 1893. The cornerstone was laid on a rainy April day of that year.

Disappointment was written on the face of everyone on last Tuesday morning, on awaking, to find the rain coming gently down. After waiting patiently for so long for such a building, after so many wearying disappointments, for we are told that “hope deferred maketh the heart sick,” surely the Fates would be propitious enough to grant us a pleasant day.

But when the time came for laying the cornerstone and still the rain came down, the loyal friends of Denison swallowed their disappointment, donned their mackintoshes, hunted up discarded overshoes or bought new ones, got out their umbrellas and started for the college campus. There was one consolation, however, which seemed to make up for a great deal of discomfort. Was not the other great event of the year, the inauguration of President Cleveland, held under similar discouraging circumstances. Furthermore, there were not any of those attendant disagreeable features of a Presidential inauguration, such as public receptions, midnight balls, etc. So we think, on the whole that we had little reason to complain and we humbly beg the pardon of the Fates for even hinting that they might have chosen a pleasanter day.

In January of 1894, the Barney Memorial Science Hall was fully constructed, but still needed to be furnished. The expected cost was $10,000, but the University had only secured $6,500. President Daniel Purinton reached out to Denison trustee, John D. Rockefeller. As soon as Rockefeller received the note from President Purinton, he sent $3,600. Barney Memorial Science Hall was dedicated on June 13, 1894. 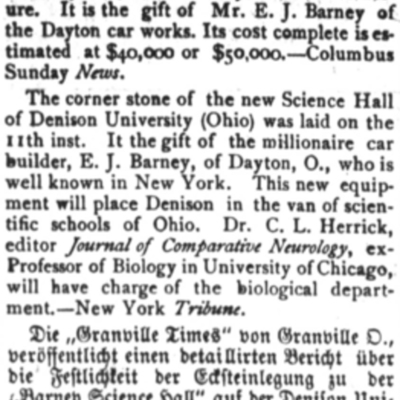 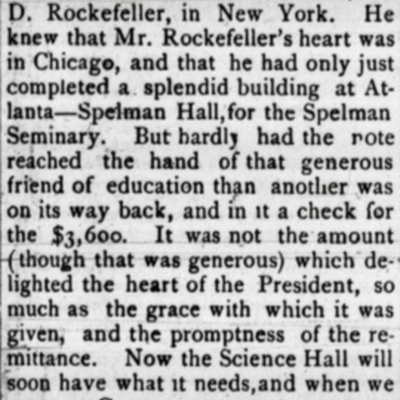 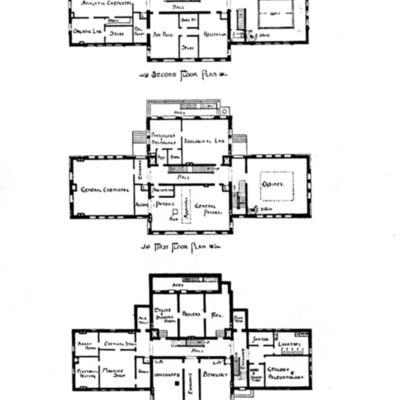 Floor plans for Barney's layout during its construction. 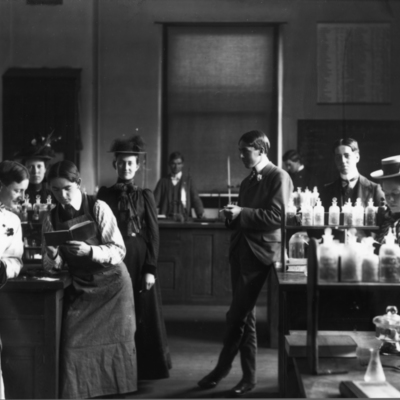 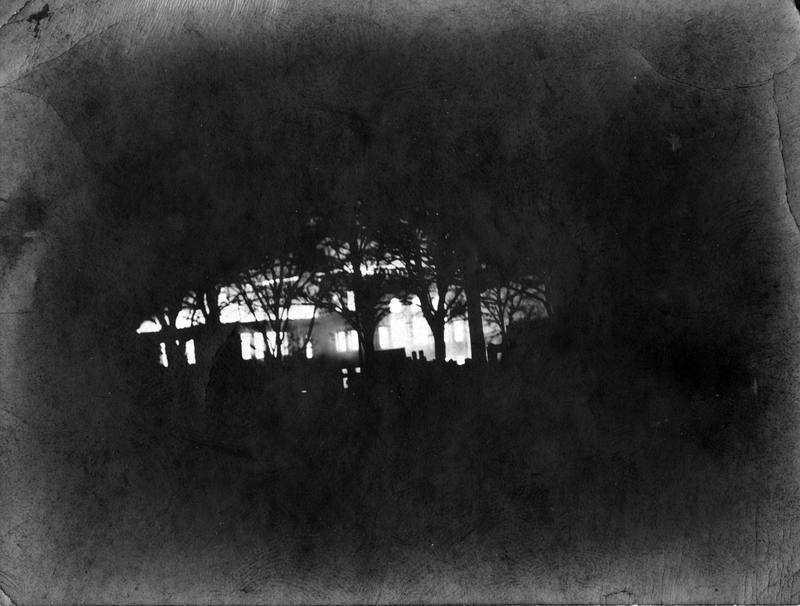 Fire in the Hall

On March 30, 1905, tragedy struck. Three students were retuning from a dance in Newark between 1:00 and 2:00 that morning when they saw flames coming out of Barney Memorial Science Hall. They quickly rushed back down the hill to sound the alarm. There was a slow response from the villagers and once enough volunteers had been found, weak water pressure let the fire spread throughout the entire building with little resistance. Villagers, students, and faculty alike braved the flames to save what they could, but eventually it became unsafe to attempt any further rescues. The entire inside of the building was burned out, taking with it scores of irreplaceable items of scientific importance. Physics instruments recently built by Prof. Chamberlain, most of the biological specimens donated over many years, and the entire scientific library, including the manuscripts of the recently deceased Prof. C.L. Herrick, were all casualties of the blaze.

The new Science Hall, rising over the ashes of [Herrick]’s books, should be a perpetual inspiration to the men who may continue to carry on research at Denison. - Frank Carney in the April 1, 1905 edition of The Denisonian 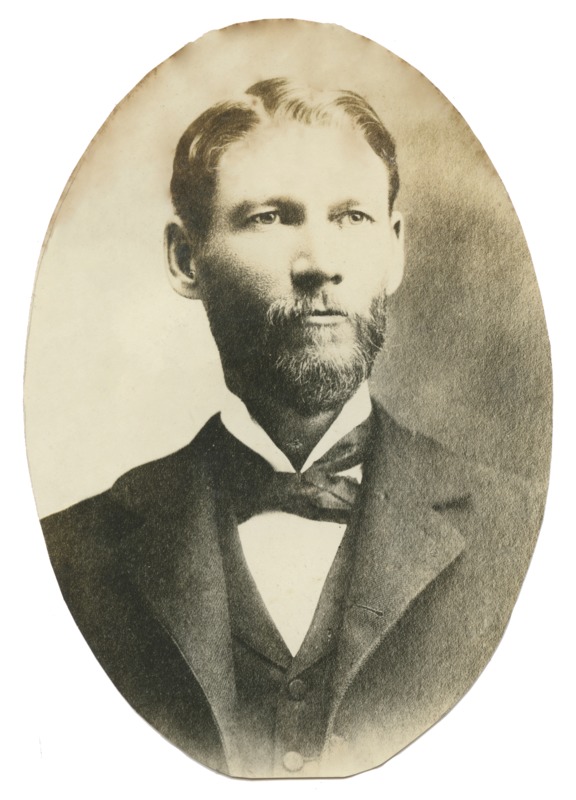 Clarence Luther Herrick had campaigned heavily for a new science building in the late 1800s. He died in 1904 in New Mexico at age 46.

Rising from the Ashes

The University was in the middle of a string of new projects. Cleveland Hall was near completion. The construction of more women’s dormitories on the Shepardson Campus was in progress. But the trustees decided it was very important for Barney Hall to be rebuilt as soon as possible. E.J. Barney again stepped forward and funded the entire reconstruction process – aside from the amount covered by the fire insurance. Barney Memorial Science Hall would rise again, this time with greater fireproofing materials in its construction and safes to hold the most precious items in case of another blaze.

Like Rockefeller during the first Barney construction, Andrew Carnegie stepped forward to help furnish the science hall during its rebuilding. Carnegie gave $15,000 to be used for replacing equipment. Arguably more important, but harder to track down, would be a new scientific library. While much of it would be impossible to replace, such as the C.L. Herrick library, it was crucial to track down sets of published research for researchers to reference. Word spread to noted geologist, Grove Karl Gilbert, that Denison was in desperate need of a new scientific library. Perhaps it was because G.K. Gilbert personally knew Prof. Frank Carney, the head of the Geology Department, or because he knew the Denison trustees supported its professors' and students’ scientific endeavors, he chose to donate his library to the university. Professors such as L.E. Hicks, C.L. Herrick, W.G. Tight, Thomas Watson, and now Prof. Carney were helping Denison University to become world renowned for its Geology Department.

When the rebuilding was finished, only the Engineering, Physics, and Geology Departments returned to Barney Memorial Science Hall. Chemistry was relocated to the basement of the Doane Academy building. The Biology Department would occupy parts of East Dormitory. (East Dormitory, located just south of present day Knapp Hall, was renamed Talbot Hall in 1910 in memory of Denison’s fifth president, Samson Talbot. Almost 100 years later, the Biology Department would move into the newly constructed Samson Talbot Hall of Biological Science). 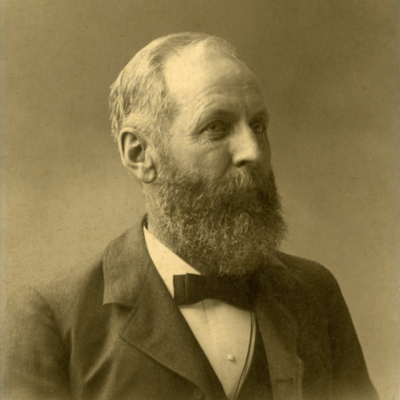 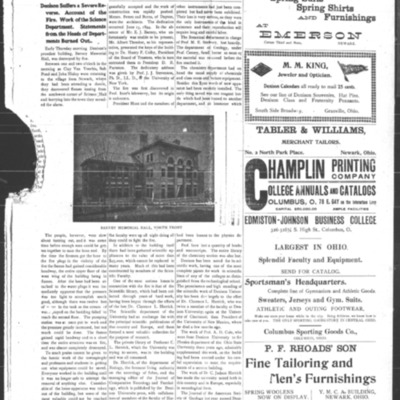 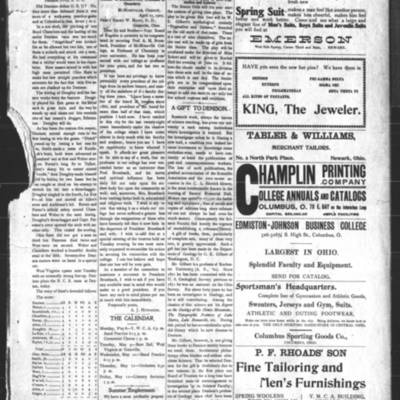 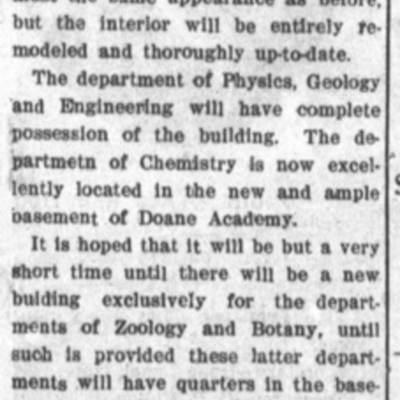 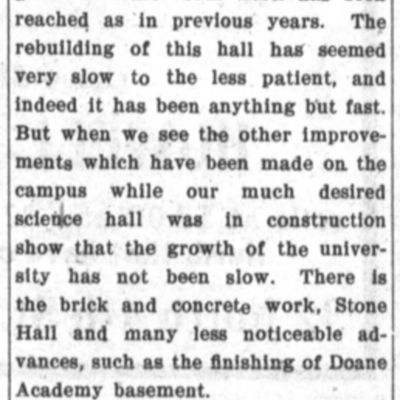 January 16, 1907: Geology to be the first class in the rebuilt Barney Memorial Science Hall. 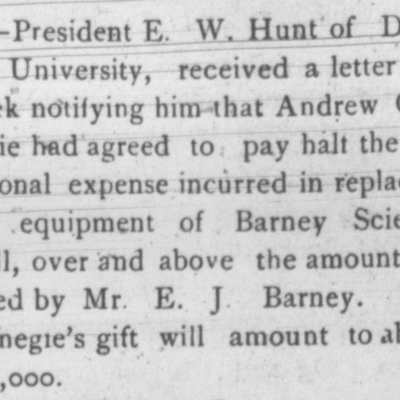 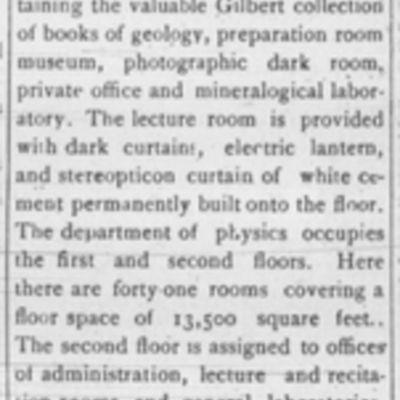 With the construction of the F.W. Olin Science Hall in 1994, the science departments who had called Barney Home for almost 100 years said goodbye. But Barney was quickly put to use. For a semester, the Welsh Hills School operated out of the building. Shortly after that, Barney underwent badly needed renovations. Jeanette Davis, class of 1924, and her husband Samuel Davis, class of 1926, gave $1 million toward the remodeling project. The building was then renamed Barney-Davis Hall in honor and memory of their contribution. Neither Jeanette nor Samuel lived to see the project completed. Barney-Davis was rededicated in April of 1999 and it became the permanent home of the English Department and the newly formed Environmental Studies Department.