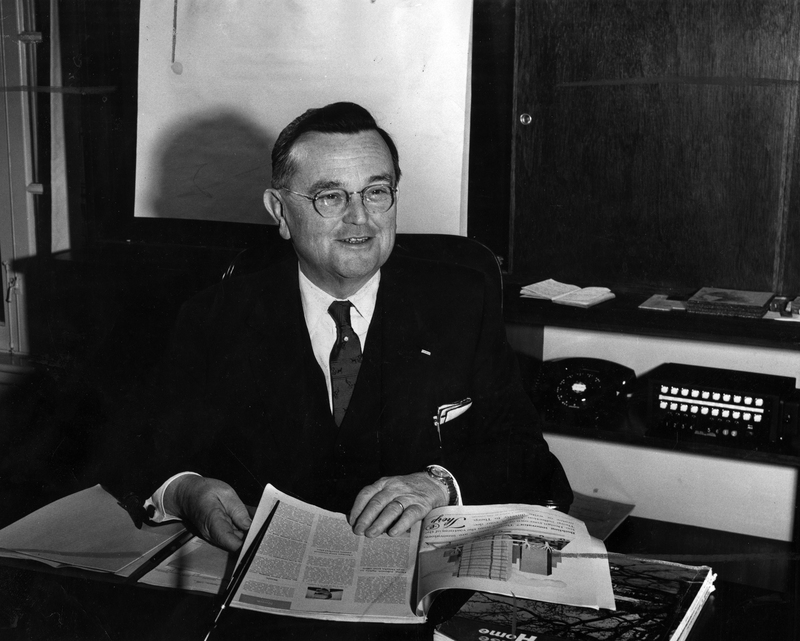 Games Slayter at his desk.

Russel Games Slayter was born on December 9, 1896, in Argos, Indiana, to Alonzo and Margaret Shoemaker Slayter. Games Slayter, as he preferred to be called, attended Argos High School along with his future wife, Marie Foor, whom he married in 1917 after she briefly attended Ohio Northern University. In spring of 1918, Games Slayter was shipped overseas to fight in World War I. Almost exactly a year later, he returned home from France. Games Slayter then went to Purdue University, graduating in 1921 with a degree in Chemical Engineering.

Games Slayter began working for Owens-Illinois Glass Co. in 1931. There in Toledo, Ohio, Games Slayter secured funding researching possible applications of glass and soon brought Jack Thomas on board who in turn hired Dale Kleist shortly after he graduated from college. One day Kleist was spraying melted glass at blocks in an attempt to seal them. While they failed to seal the blocks, tiny glass fibers were produced. Thomas quickly realized the potential and together the two men created a steam-blown process for creating the glass fibers. Slayter then built off of this work, greatly streamlining the process in order to create larger volumes of the glass fibers. The innovations were patented and the materials became know as Fiberglas. Fiberglass, as most people spell the material today, came to be widely used in construction for insulation and noise reduction, among other applications.

On October 15, 1964, Games Slayter died of a heart attack in the Columbus airport.