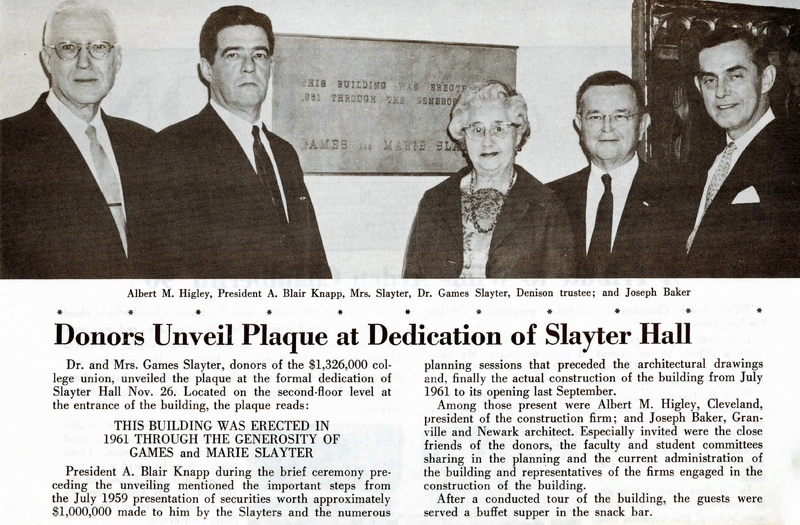 In July of 1959, Games and Marie Foor Slayter presented a $1 million gift to Denison University for the construction of a student union on campus. It was to be named in their honor and would be built in between the oldest (Talbot Hall, 1871) and newest (Life Science Building, 1941) academic buildings on campus. Student and faculty surveys were sent out to decide what features would be most well received by the campus. In April of 1961, ground was broken for Slayter Hall (often referred to as Slayter Union), with the actual construction beginning in July. On March 15, 1962, a large cement block broke loose from the crane’s line. The block crashed into a scaffold with five workers on it. One man was thrown into the building and not seriously injured. Another man clung to the side of the building until he could safely be helped down. The last three men fell to the ground – two were left in critical condition and William Farrow, Sr. was pronounced dead after arriving at the hospital. Students and The Denisonian praised how the Albert M. Higley Co. workers handled the aftermath of the tragic accident – acting quickly to aid the hurt men and calmly handling onlookers.

The student union was finished by the fall of 1962 and was formally dedicated on November 26 of that year. A plaque was unveiled which honored the patrons of the student union. A tour of the building was also given before there was a buffet supper in the snack bar area.

Slayter Union was built with the students of Denison in mind. Not only was there a bookstore and a mail office now conveniently located right on the academic quad, there was also plenty of entertainment options for the college student looking for a study break. Over the years, the attractions and layouts have changed drastically.

On the top floor of Slayter Hall, there is a large auditorium. Over the years, it has been used for talks, Denison Film Society screenings, and informational presentations to students. 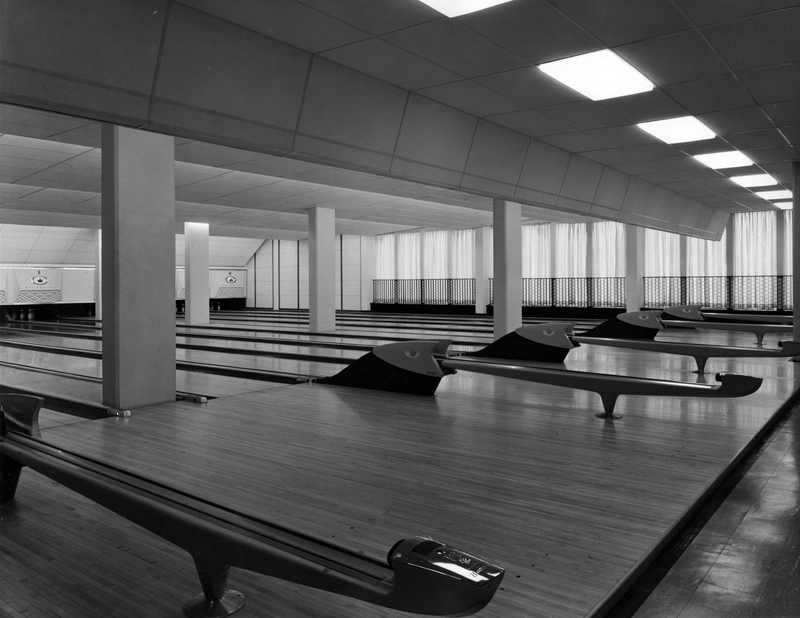 Slayter originally had a bowling alley on the third floor which eventually grew to be 10 lanes. A popular pastime of the era, it also allowed Games Slayter to showcase one of his patents – a glass related insulation which greatly soundproofed the building. It clearly must have worked because the bowling alley stayed there for roughly three decades without any noise complaints from lower floors. Aside from bowling, there was also a small arcade in the building and dart boards and pool tables on the third floor. 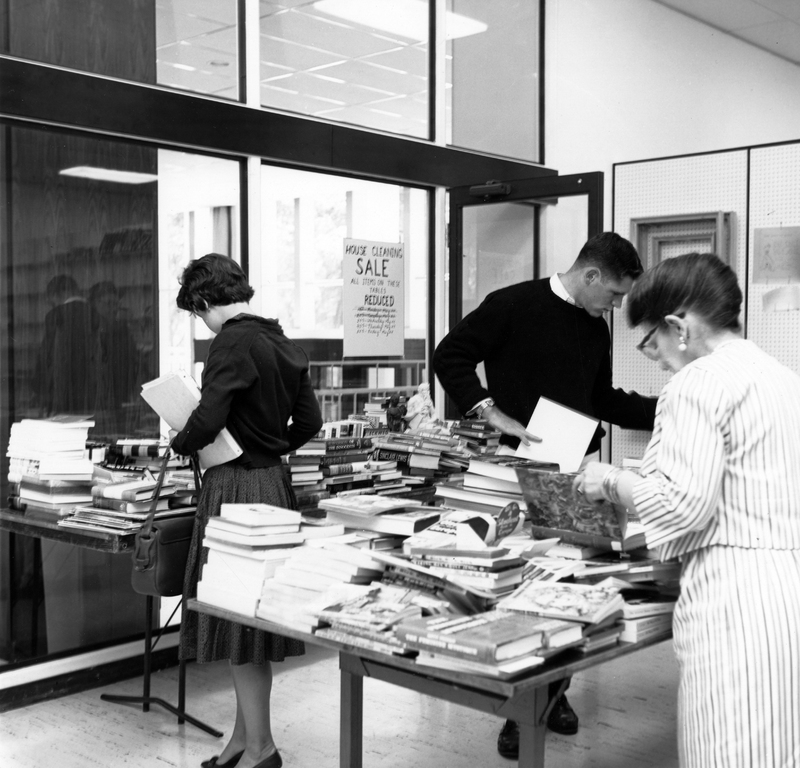 The bookstore became a conveniently located source for textbooks as well as day to day items such as cough drops, notebooks, and postcards to send home. Students could also find vinyl records from artists such as The Keystone Brothers, which recorded a show they did in the Slayter Auditorium, and on campus groups such as The Hilltoppers. Books written by faculty such as Wally Chessman’s book on the history of Denison appeared on the shelves, and continue to do so today with titles such as Any Other Place by Michael Croley and David Baker’s Swift: New and Selected Poems.

The Slayter mail room doubled as an information desk for many years. Aside from packages, students could borrow billiard balls for the pool tables on the upper floors. Each student collects their mail from their own Slayter Box – along with tests teachers slip in their boxes after class or flyers announcing the Vail Series schedule at the beginning of the year. 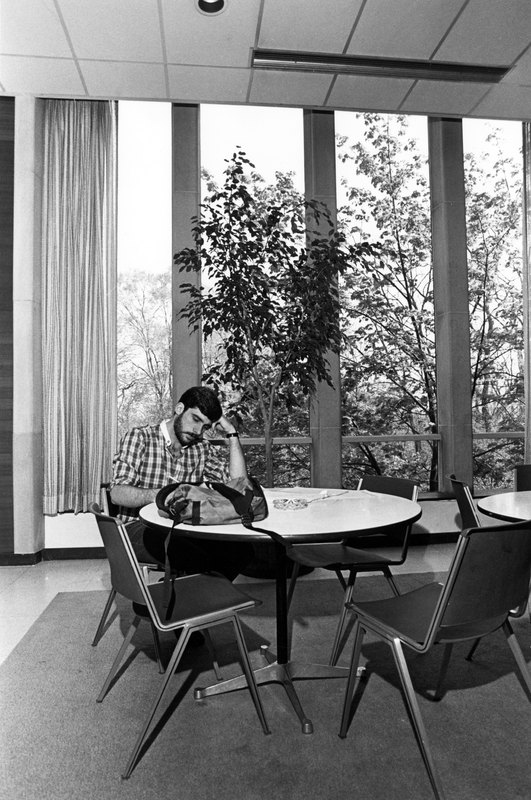 Slayter also had a plethora of seating areas for students. Tables by the big windows in the back became a great study spot. Comfortable and stylish chairs along with a magazine rack on the main floor were probably responsible for many an hour away from studying.

In the basement of Slayter, there was the snack bar. A convenient place to grab food fast, it continues to be a popular dining place on campus. With plenty of seating, including the “Slayter Pit” under the stairs, students can be found here waiting shortly before 1pm for their declining dollars to be accepted or grabbing a late night snack. And on one occasion, a deer crashed through a window to check it out for themselves. 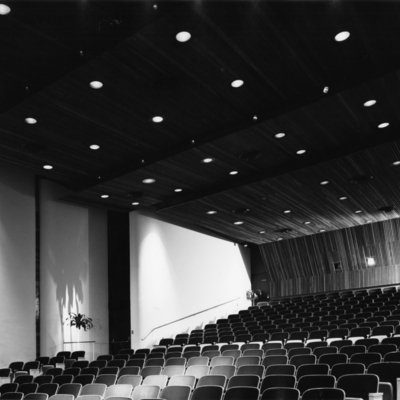 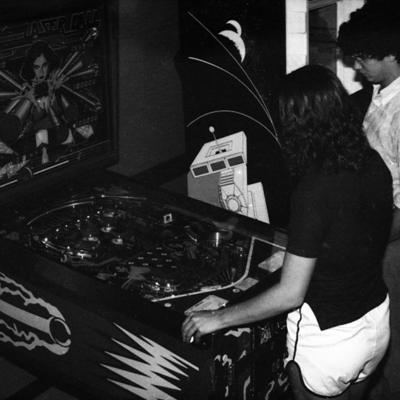 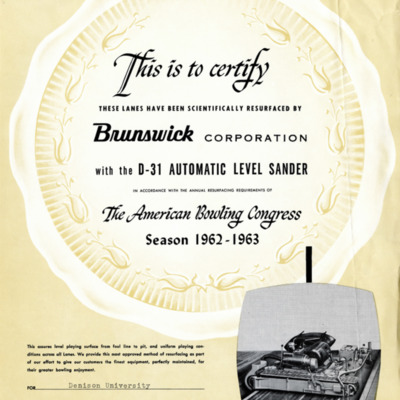 Certificate stating that Slayter's bowling alley lanes had been sanded. 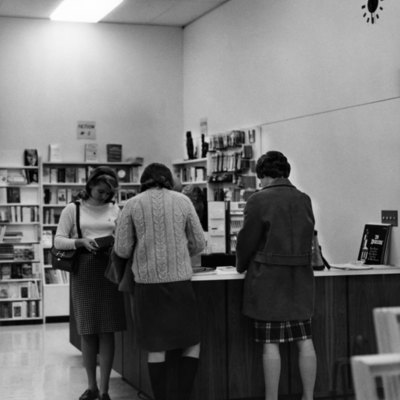 Slayter Bookstore check-out. Note the vinyl record for sale on the desk. 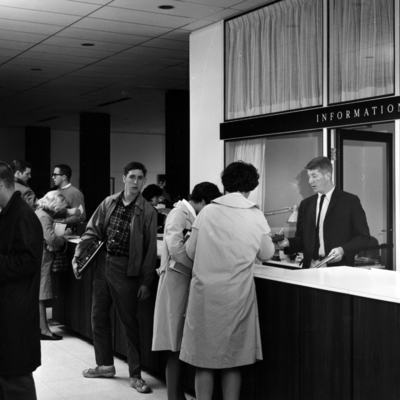 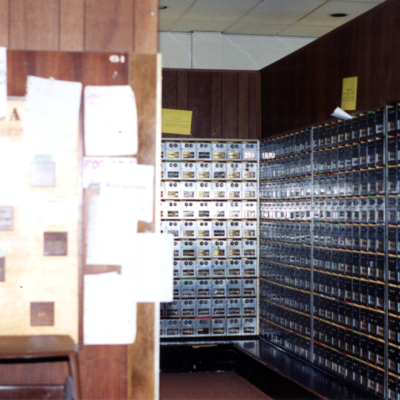 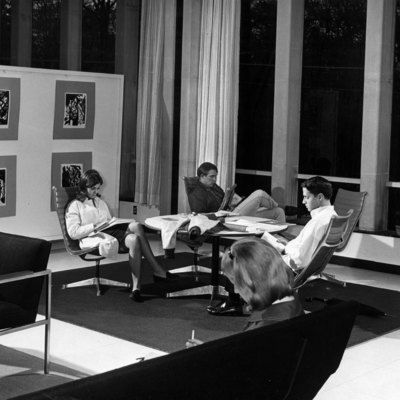 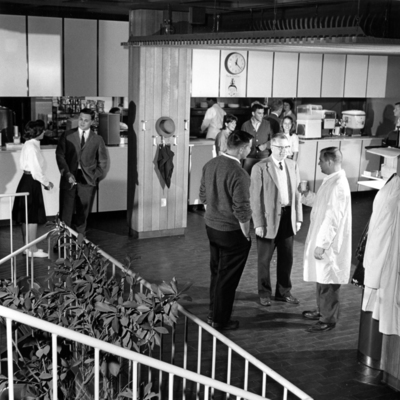 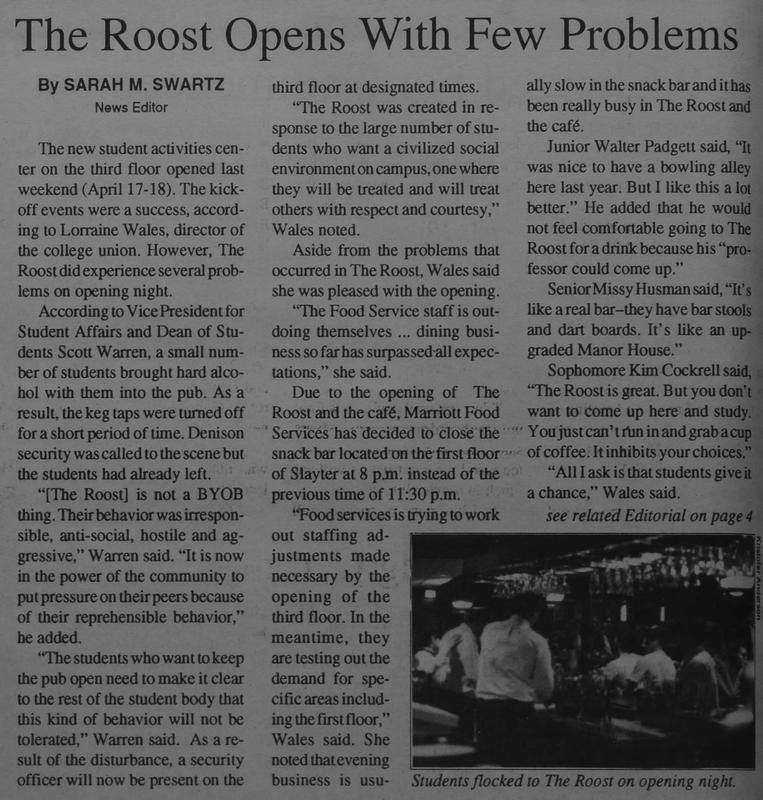 In the mid-1980s, plans began forming to significantly change Slayter’s third floor. There was push back, especially from Prof. Richard Mahard who believed it strengthened town gown relations and Wallace Chessmen who echoed this and also added that the bowling alleys were intended to highlight Games Slayter’s insulation. In addition, it was impossible to say that the waning interest in bowling was a permanent trend. In 10 or 20 years’ time, perhaps there would be enough interest to justify the bowling alley once again. But it was a futile argument. Plans were drafted by the early 1990s to rip up the entire bowling alley.

In April of 1993, the renovated third floor was officially opened. Aside from the pub/deli known as “The Roost,” there was also a café, a small convenience store, as well as a few remaining pool tables and a dart board. The Roost served alcohol during late night hours, “It’s not going to be a Busch Light served in a plastic cup,” said Campus Activities Director John Berry. Instead, beer would be served in pilsners and wine would come in stemmed glasses. The menu would reflect that of a New York Deli’s and be available during both lunch and the late night pub hours. The café would only be open during weekdays and have freshly baked pastries on offer. 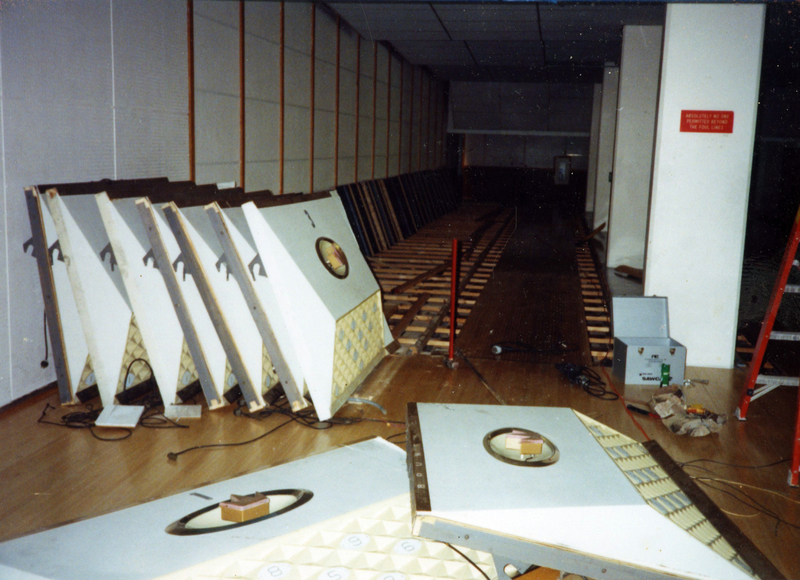 In the ensuing decades, tweaks have been made to the third floor. The pool tables and dart board have vanished. The pub has transformed into “The Nest at the Roost” (Just “The Nest” for short) and normally serves flatbread pizzas during late night hours. Alcohol returned to Slayter in the 2018-2019 academic year. Gone are the days of the crash of falling bowling pins. Instead there is either loud music and the sound of conversations being drowned out when The Nest is open and only silence or the quiet chatter of a few people sitting in one of the booths when The Nest is closed. 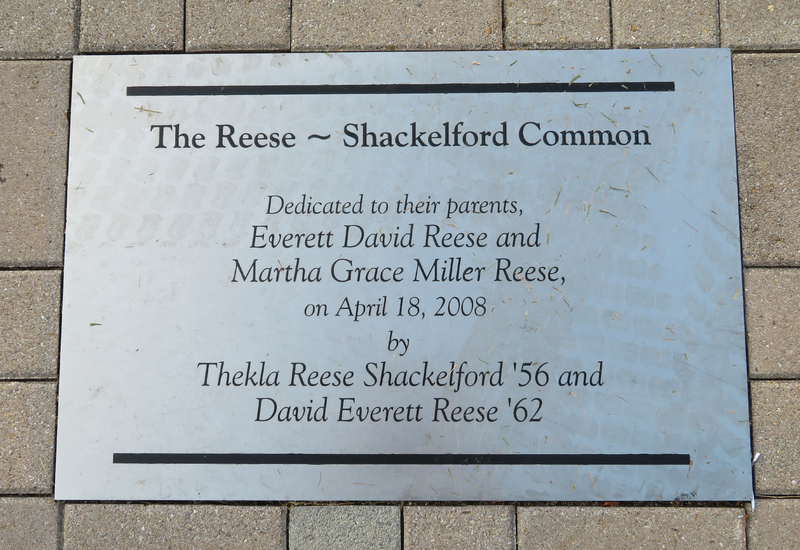 Plaque on the Reese ~ Shackelford Common.

In the mid-1990s, it was becoming clear that the Life Science Building (renamed Higley Hall in 1997) was no longer sufficient for the Biology Department. Plans began being drawn up for what would become the Samson Talbot Hall of Biological Science. At the same time, it was decided to convert the hillside behind Swasey into a parking garage with a lawn on top and to construct the Burton D. Morgan Center on the opposite end of the lawn from Talbot Hall. In 2001, construction of the immense project began. Professor emeritus Richard Mahard suggested that the stratigraphy of the rocks be showcased in a section of the parking garage as a useful learning tool for the Geology Department. Sadly, the suggestion never led anywhere.

The project was completed in 2003. The lawn behind Slayter was later renamed the Reese ~ Shackelford Common in 2008. It was dedicated by Thelka Reese Shackelford, class of 1956, and David Everett Reese, class of 1962, to their parents, Everett David Reese and Martha Grace Miller Reese.