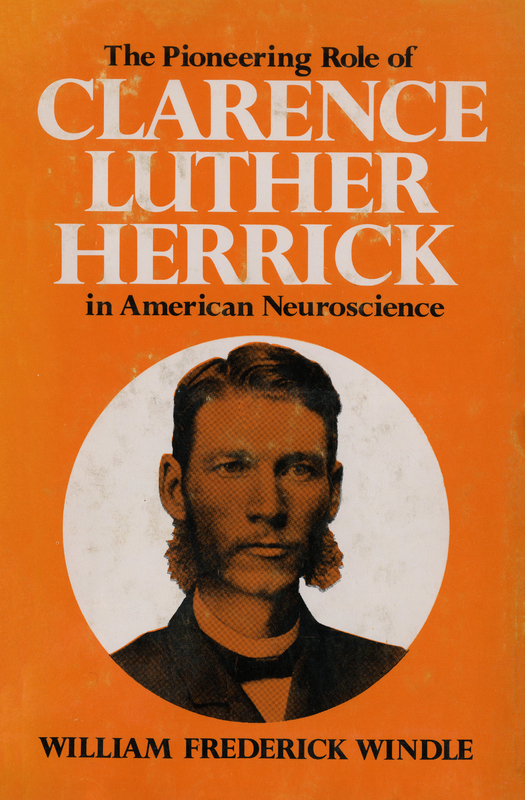 “stimulating even to a dullard”

Clarence Luther Herrick was born on June 22, 1858, to Henry Nathan and Anna Stickler Herrick in Minneapolis, Minnesota. Minnesota itself had only become a state on May 11, 1858. Henry Nathan Herrick became an ordained Baptist minister when C.L. Herrick was four years old. At age 16, C.L. Herrick entered the Minneapolis high school and entered the University of Minnesota as a subfreshman a year later. By 1879, he had worked with the Minnesota State Geological Survey and begun teaching in Minnesota. In 1880, he graduated from the University of Minnesota and a year later was at the University of Leipzig in Germany as a student. While in Germany, a chance encounter with a Denison graduate and professor named George F. McKibben led to a lifelong friendship. It was this friendship that helped bring C.L. Herrick to teach at Denison University. L.E. Hicks, the Geology and Natural History professor, had resigned in 1884 to work elsewhere. C.L. Herrick was brought on as a temporary replacement and was appointed as a full time professor a year later. By all accounts he was a professor ahead of his time. Even though he had come to Denison with hesitations about how teaching would affect his time for research, he thought after a few years of teaching a pupil would gain enough experience to help lighten his workload. One of his students, Henry Heath Bawden, class of 1893, would write about his impression of C.L. Herrick years later.

His phenomenal success as a teacher… was due to factors some of which were easily seen – others are harder to define. After his attractive personal qualities and magnetic enthusiasm, I should place his deep philosophic insight and the fearless way in which he disclosed his profound thinking to the least initiated of his pupils. The ability to do this without befogging the air was an exceedingly rare gift and was stimulating even to a dullard.

In his first year at Denison, C.L. Herrick became well acquainted with one of his students named August Foerste (Foerste would later make a name for himself as a noted geologist). Foerste introduced C.L. Herrick to many sites which yielded fossils. Collecting fossils soon became a very time consuming passion for the young professor in between his teaching and writing publications. It was on one such fossil collecting expedition that C.L. Herrick and Foerste realized that Denison should publish its own scientific journal. After Herrick was officially hired as a professor in 1885, the pair set about creating the Bulletin of the Scientific Laboratories of Denison University. (In 1922, it was renamed Journal of the Scientific Laboratories of Denison University). Foerste and C.L. Herrick wrote the six articles which appear in the first issue, with C.L. Herrick writing four and Foerste writing the other two. C.L Herrick would then go on to found the Denison Scientific Association in April 1887. Its membership was 27 strong, made up mainly of students as there were only 11 faculty members total at the time.

Quickly, C.L. Herrick also realized that his classes were in desperate need of a better space. While geology classes could spend a lot of time outdoors in places like Blackhand Gorge, there was a lot of microscope work to be done for the biology classes and in lithology. C.L. Herrick had begun doing research with William George Tight and the space was insufficient for their needs. The department also desperately needed a scientific library to house reference materials and publications received by other institutions in exchange for Denison’s Bulletin. C.L. Herrick began pushing the Board of Trustees for a new science building, but there were no funds to be had for such a project. He personally had an architect draw up plans of a potential design to possibly entice a donor to fund the project.

L.E. Hicks was the chair of the Geology & Natural Philosophy Department before C.L. Herrick. 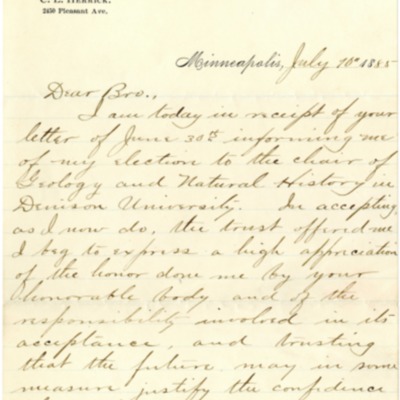 July 10, 1885: C.L. Herrick formally accepts the position as professor in the Geology and Natural History Department. 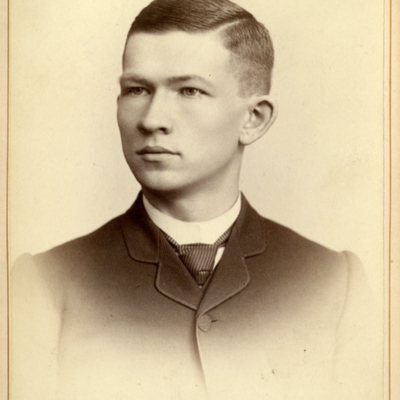 August Foerste was one of C.L. Herrick's earliest (and most successful) students at Denison. 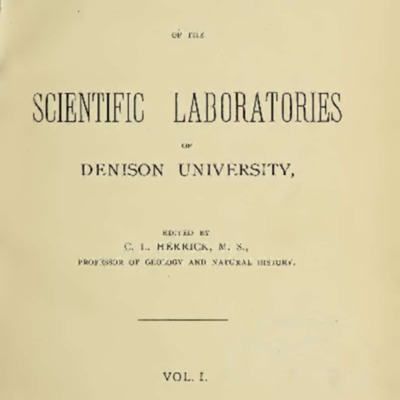 December 1885: A few pages from the first Bulletin of the Scientific Laboratories of Denison University.

June 17, 1892: Article relating all the memorable events of the 1892 commencement, including the return of C.L. Herrick.

Here, There, and Everywhere

C.L. Herrick was becoming worn down. Apparently teaching, performing research, running a scientific publication, and trying to acquire funds for a new science building takes its toll on one’s health. C.L. Herrick himself had only recently fully recovered from a fight with malaria. He wrote to a friend back in Minneapolis, “I therefore announce myself no longer a patient and return to my disbelief in medicine (when not sick)…” In 1889, C.L. Herrick announced his resignation from Denison. It may only be speculated on now, but a number of factors could have led to his leaving. He left to take a position at Cincinnati, which had a new science building and a stronger emphasis on science than the heavily Christian inflicted Denison (C.L. Herrick was said to be a devout Christian, his father was a Baptist minister after all, but he had voiced frustrations with the lack of freedom he had at Denison from time to time). In June of 1888, he was also reportedly ill again, taking a trip to Rushville, Ohio, in order to “rusticate.”

In 1892, C.L. Herrick made his triumphant return to Denison. After a few years at Cincinnati, an invitation to the University of Chicago that fell through, and a quick trip to Germany, C.L Herrick was made a professor of biology at Denison. That same year, E.J. Barney announced he would pay for the construction of the Barney Memorial Science Hall, which was even more well equipped than C.L. Herrick had originally hoped. C.L Herrick spoke at the laying of its cornerstone in April of 1893. However, not everything was working in C.L. Herrick’s favor. That same year, C.L. Herrick was hit with pulmonary tuberculosis. It would plague him so badly for the next few years that he eventually had to resign and seek refuge out west. At that time, it was believed that traveling west would help with the healing process. C.L. Herrick perhaps took that philosophy to an extreme, accepting an invitation to become the second president of the University of New Mexico after moving to the area. 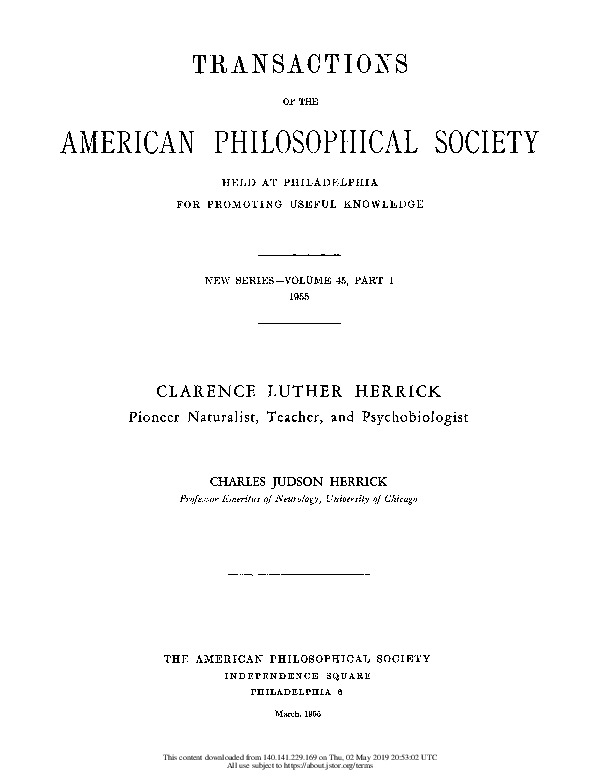 This article by C. Judson on his brother, C.L. Herrick, was a very useful resource for this piece.

In 1898, Douglas Johnson enrolled in the University of New Mexico. He had attended Doane Academy in Granville and now sought out the scientist living in the desert he had heard so much about. Johnson himself had been told to travel west because he may have tuberculosis and had decided to take the opportunity to meet C.L. Herrick. President Herrick met Johnson when he arrived at the train depot and immediately recognized Johnson’s abilities, and was likely happy to take a student from Denison under his wing once more. President Herrick was still actively working in the geological field and employed Johnson as an assistant. But C.L. Herrick was obviously a dying man. Small misunderstandings between Johnson and Herrick would lead the latter to pour forth a barrage of sarcastic insults to Johnson. But each time, once his mind had cleared, C.L. Herrick would apologize and regret such outbursts. He would explain to Johnson that he suffered from terrible headaches which he believed limited his restraint. It also was only trivial matters which brought about such outbursts – any serious emergency was met with a calm C.L. Herrick totally in control of the situation. Johnson forever cherished his time in the field with C.L. Herrick, from his childlike wonder, to his firm grasp of subjects ranging from geology and psychology to philosophy and religion, and his humor even in the face of his own sickness.

In 1901, his worsening condition forced C.L. Herrick to resign his position as president (W.G. Tight, his star pupil from Denison who had replaced him as the Geology and Natural Philosophy professor, came to New Mexico and became the third president of the university). C.L. Herrick took up work with various mines as a geologist for the next few years. On September 15, 1904, C.L. Herrick died. He was 46 years old.

In March of 1905, a fundraising drive was started in order to purchase C.L. Herrick’s library to be added to Denison’s scientific library. On March 30, 1905, a fire broke out in Barney Memorial Science Hall. Luckily, C.L Herrick’s collection of Waverly fossils, along with most of the microscope slides, had been saved, including brain sections which had been prepared by C.L. Herrick. However, C.L. Herrick’s personal library had been recently shelved in the scientific library while details of its official acquisition were worked out. C.L. Herrick’s entire collection, along with the rest of the library comprised of invaluable reference materials, complete sets of the Bulletin of the Scientific Laboratories of Denison University which Herrick had helped start, and publications which had been traded with other institutions in exchange for the Bulletin, all were destroyed in the fire. Biological specimens, such as hundreds of Mexican birds donated by C.L. Herrick, were also lost to the blaze. The brilliant scientist who had done so much for Denison was all but erased in a day. 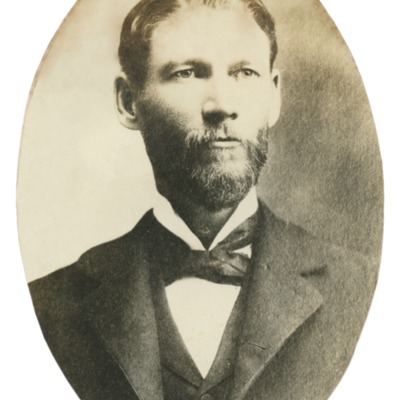 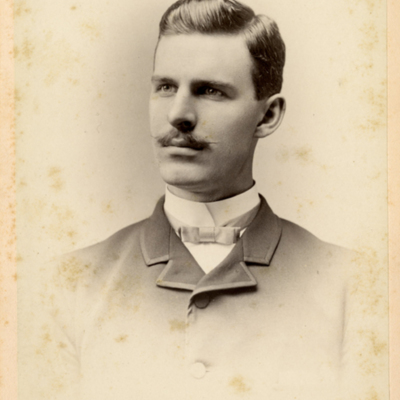 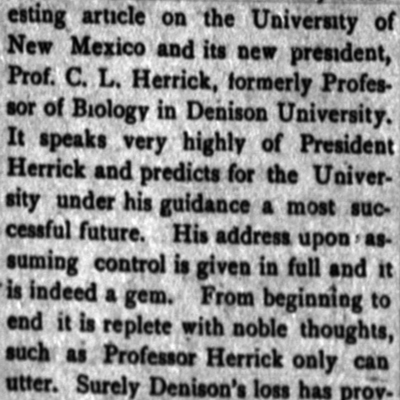 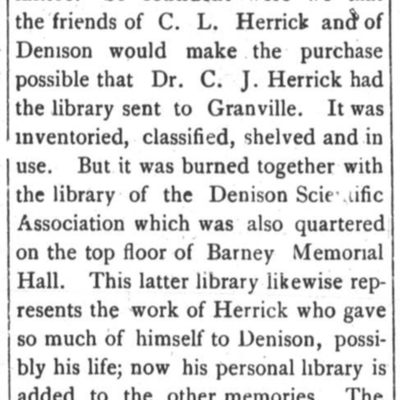 April 1, 1905: Frank Carney reports to The Denisonian that the entire C.L. Herrick Memorial Library was lost in the Barney Hall fire.